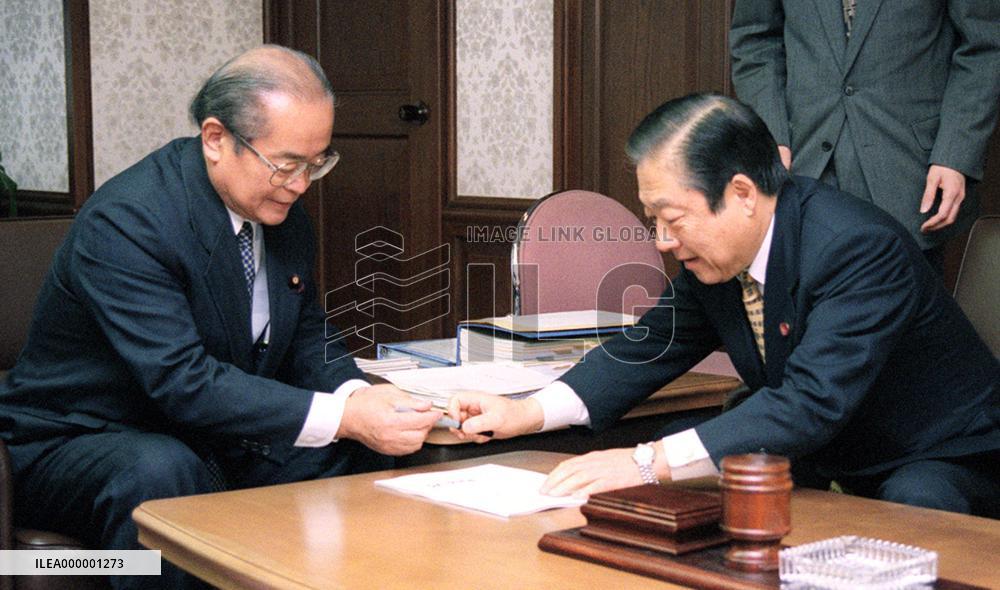 Newly appointed Justice Minister Takao Jinnouchi (L) takes over the duties of his predecessor Shozaburo Nakamura on March 9. Nakamura resigned the previous day, giving into pressure from opposition parties to step down over a series of his remarks and actions, including alleged abuse of office. ==Kyodo

Sri Lankan Prime Minister Ranil Wickremesinghe was sworn in as interim president before the chief justice on Friday, following the resignation of Gotabaya Rajapaksa, according to the prime minister's office. Earlier in the day, Sri Lanka's Parliament Speaker Mahinda Yapa Abeywardena said he has received the resignation letter of the president, and from this point forth the president has legally resigned from his legal duties and responsibilities. "Under these circumstances, the constitutional procedure of appointing a new president will now be activated. Until this constitutional procedure is over, according to the constitution the prime minister will function in the capacity of the president overseeing functions, duties, and powers of the office of the president," the speaker told a media briefing. The speaker added that parliament will convene on July 16 and he requested all legislators to attend parliamentary sessions on that day. He requested maximum cooperation for the democratic process of

STORY: Pakistani PM calls for unity of Islamic world, assistance to Afghanistan DATELINE: March 23, 2022 LENGTH: 00:02:08 LOCATION: Islamabad CATEGORY: POLITICS SHOTLIST: 1. various of Pakistani Prime Minister Imran Khan making a keynote speech STORYLINE: Pakistani Prime Minister Imran Khan in Islamabad on Tuesday called for the unity of the Islamic world to deal with problems faced by Muslims across the globe and bring peace in the world. Khan made the remarks during his keynote speech at the 48th session of the Council of Foreign Ministers of the Organization of Islamic Cooperation (OIC), which kicked off on Tuesday. According to the Foreign Ministry of Pakistan, global and regional landscapes, sustainable development and climate change are among the topics that will be discussed at the two-day session under the theme of "Building Partnerships for Unity, Justice and Development." Talking about the Afghanistan issue, Khan said that the country has suffered a years-long conflict, adding that helping Afg Chong A Yong (right), a permanent Korean resident in Japan, mails his alien registration card to Japan's Justice Minister Takao Jinnouchi at Osaka Central Post Office on June 5 in protest against a Japanese law that requires foreign residents to carry their alien cards all the time. The placard behind Chong reads ''No to alien registration card.'' The card-carrying requirement will remain intact even though the government plans to decriminalize the punishment against violators. ==Kyodo Emperor Akihito (L) attests the appointment of House of Councillors member Takao Jinnouchi (R) as new justice minister at the Imperial Palace in Tokyo on March 8. Jinnouchi succeeded Shozaburo Nakamura, who resigned earlier in the day amid pressure from opposition parties to step down over a series of remarks and alleged abuse of office. ==Kyodo