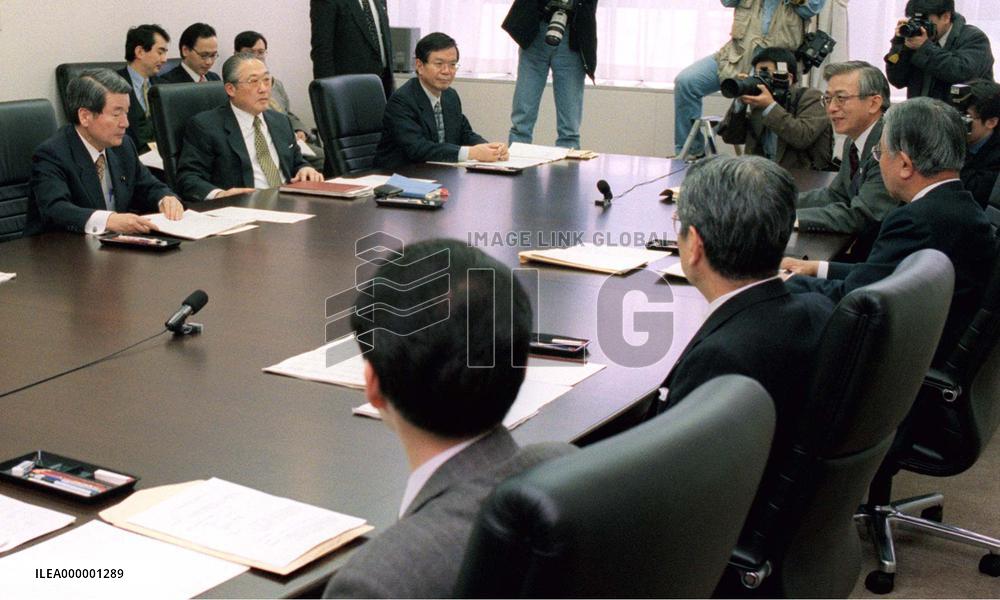 The government's Financial Reconstruction Commission (FRC) approves March 12 requests from 15 major Japanese banks for a total of 7.46 trillion yen in public funds to help clear up their bad loans. ==Kyodo

STORY: Pakistani PM hails China for timely flood relief aid DATELINE: Sept. 30, 2022 LENGTH: 0:00:42 LOCATION: Islamabad CATEGORY: POLITICS SHOTLIST: 1 various of the flooded area 2 various of Pakistani Prime Minister Shahbaz Sharif speaking 3 various of Chinese Ambassador to Pakistan Nong Rong 4 various of the arrival of Chinese-donated relief goods for Pakistan 5 various of the flooded area STORYLINE: Pakistani Prime Minister Shahbaz Sharif has appreciated China and its leadership for providing timely aid and relief goods for the flood-affected people of the country. Speaking at a meeting to donate funds for the flood-affected people by the China Three Gorges Corporation (CTG) at the Prime Minister's House in the capital Islamabad on Thursday, Shahbaz expressed his gratitude to the Chinese government, leadership and people who stood by Pakistan during the difficult time. Chinese Ambassador to Pakistan Nong Rong and a delegation of the CTG led by the deputy head of the China Three Gorges South Asia Inve

STORY: Kenyan president calls for measures to curb high inflation DATELINE: Sept. 29, 2022 LENGTH: 0:02:07 LOCATION: Nairobi CATEGORY: ECONOMICS SHOTLIST: 1. various of street shots in Nairobi 2. various of Kenya president at press conference 3. various of Telcos and banks executives 4. SOUNDBITE 1 (English) WILLIAM RUTO, Kenya's President 5. various of street shots 6. SOUNDBITE 2 (English) PATRICK NJOROGE, Central bank governor, Kenya 7. various of street shots STORYLINE: Kenya's President William Ruto on Wednesday asked financial institutions to come up with a credit model that will allow small businesses to access affordable loans to cushion them from the harsh effects of high inflation. During a meeting with financial institutions, Ruto said lowering the cost of credit is part of multiple interventions to lower the cost of living. SOUNDBITE 1(English): WILLIAM RUTO, Kenya's President "I'm very confident that if we give shiku (common Kenyan) and her team and many of them in Kenya the opportunity to bo

STORY: Lebanese banks return to work amid strict security measures after recent raid incidents DATELINE: Sept. 28, 2022 LENGTH: 00:01:24 LOCATION: Beirut CATEGORY: POLITICS/ECONOMY SHOTLIST: 1. various of cars passing by Fransabank in Hamra 2. various of people standing outside Fransabank in Hamra 3. various of a client and a member of security forces standing outside the bank 4. various of people speaking to bank employees STORYLINE: Ten days after an unprecedented wave of bank raids by angry depositors, Lebanese commercial banks returned to work on Monday by adopting strict security measures and restrictions. Depositors waited for long hours in the hope of being able to withdraw their salaries with some people clashing with security forces deployed to protect banks and prevent new raids. People expressed their distress for not being able to withdraw their money properly due to the closure of most of the banks' branches all over the country. Lebanon has been facing an unprecedented financial crisis du

STORY: Greece presents energy-saving measures for public sector DATELINE: Sept. 8, 2022 LENGTH: 0:00:52 LOCATION: Athens CATEGORY: SOCIETY SHOTLIST: 1 various of streets views STORYLINE: The Greek government presented on Wednesday a package of energy-saving measures in the public sector as part of wider efforts to address the current energy crisis and act against climate change. It is aimed to reduce energy consumption in the public sector by 10 percent in the coming months and by 30 percent by 2030, Environment and Energy Minister Kostas Skrekas told a press conference on Wednesday. Organizations meeting the targets will be awarded extra funds, while those lagging behind will not get funding for new hirings. A digital energy consumption monitoring system will also be launched, and all public entities should appoint energy managers for each of their buildings to make sure lights and devices are switched off when not in use and heating and cooling systems are properly maintained. Moreover, m

U.S. under pressure in curbing monkeypox outbreak as caseload tops 20,000

STORY: U.S. under pressure in curbing monkeypox outbreak as caseload tops 20,000 DATELINE: Sept. 8, 2022 LENGTH: 00:01:29 LOCATION: NEW YORK, U.S. CATEGORY: HEALTH SHOTLIST: 1. STANDUP (English): XIA LIN, Xinhua correspondent 2. various of street views in the U.S. 4. various of a vaccination site STORYLINE: STANDUP (English): XIA LIN, Xinhua correspondent "More than three months into the monkeypox outbreak, over 20,000 monkeypox cases have been confirmed in the United States, according to the latest data from the U.S. Centers for Disease Control and Prevention (CDC). A total of 20,733 known monkeypox cases had been reported nationwide as of Sept. 6. California had the most cases with 3,833, followed by New York with 3,526 and Florida with 2,126. The U.S. government is ramping up a monkeypox vaccination campaign -- sending thousands of vaccine doses to reach large gatherings of gay, bisexual and queer people who are at higher risk of getting exposed to and infected by the virus. Concerns are mounting tha

STORY: Egypt's total foreign debt accounts for 19.2 pct of GDP: minister DATELINE: Aug. 30, 2022 LENGTH: 00:01:20 LOCATION: Cairo CATEGORY: ECONOMY SHOTLIST: 1. various of the headquarters of the Egyptian Ministry of Finance 2. various of the conference STORYLINE: Egyptian Finance Minister Mohamed Maait held a press conference on Monday to introduce the economic situation in Egypt. The minister explained that the debt-to-GDP ratio decreased from 103 percent in June 2017 to 87.2 percent in June 2022. According to the minister, 77 percent of the government's debt is domestic to institutions and individuals in Egypt, and only 23 percent is external in hard currency, and the external debt of the budgetary organs accounted for 19.2 percent of the GDP in June 2022. The minister said that the size of the Egyptian economy has tripled during the past six years, at rates that exceed the government's indebtedness, in a way that reflects the government's success in directing development funds to real investments.

STORY: Egypt's central bank issues 21.5 bln EGP in T-bills DATELINE: Aug. 29, 2022 LENGTH: 00:01:17 LOCATION: Cairo CATEGORY: ECONOMY SHOTLIST: 1. various of Finance Ministry 2. various of Central Bank of Egypt 3. various of accountant counting banknotes 4. various of people waiting for their turns at an ATM 5. exterior of the National Bank of Egypt 6. exterior of different banks STORYLINE: The Central Bank of Egypt (CBE), on behalf of the Finance Ministry, issued 21.5 billion Egyptian pounds (about 1.12 billion U.S. dollars) in treasury bills (T-bills) on Sunday. The T-bills were offered in two installments, with the first one valued at 14 billion EGP with a 91-day term, and the second worth 7.5 billion EGP with a 273-day term. The government borrows through bonds and treasury bills over different periods of time; the government banks are the largest purchasers of them. The banks operating in the Egyptian market are the largest sectors investing in bonds and treasury bills, which the government periodi

STORY: Tanzania unveils small-scale miner for discovering big tanzanite DATELINE: Aug. 28, 2022 LENGTH: 00:03:27 LOCATION: DAR ES SALAAM, Tanzania CATEGORY: ECONOMY SHOTLIST: 1. various of small-scale miners who attended the unveiling of tanzanite gemstone 2. various of the signing of MOU between Anselim Kawishe and government officials 3. SOUNDBITE (Swahili): ADOLF NDUNGURU, Permanent secretary in the Ministry of Minerals STORYLINE: Tanzanian authorities on Saturday unveiled a small-scale miner for discovering two tanzanite gemstones weighing a total of 5.22 kilograms. Tanzanite is a rare blue gem only produced in northern Tanzania. Anselim Kawishe, a miner, was announced by the permanent secretary in the Ministry of Minerals, Adolf Ndunguru, at a ceremony held at the Mirerani tanzanite mining area in Simanjiro district in the Manyara region. Kawishe's new tanzanite discovery was valued at 1 million U.S. dollars, said Ndunguru. Kawishe said he has been looking for the tanzanite gemstones for the past

STORY: U.S. reports over 15,000 monkeypox cases in all 50 states DATELINE: Aug. 24, 2022 LENGTH: 00:01:32 LOCATION: NEW YORK, U.S. CATEGORY: HEALTH SHOTLIST: 1. STANDUP (English): XIA LIN, Xinhua correspondent 2. various of the street view in Times Square 3. various of a monkeypox vaccination site STORYLINE: STANDUP (English): XIA LIN, Xinhua correspondent "The United States has confirmed over 15,000 monkeypox cases across all 50 states, according to the latest data from the U.S. Centers for Disease Control and Prevention, or CDC. A total of 15,433 monkeypox cases had been reported nationwide as of August 22, according to the CDC data. The United States now has the world's highest tally of monkeypox cases. New York had the most cases, with 2,910, followed by California with 2,663 and Florida with 1,588. The U.S. government has been facing criticism in its response to the monkeypox outbreak, including failure to order enough vaccines, speed treatments and make tests available to head off the disease. To