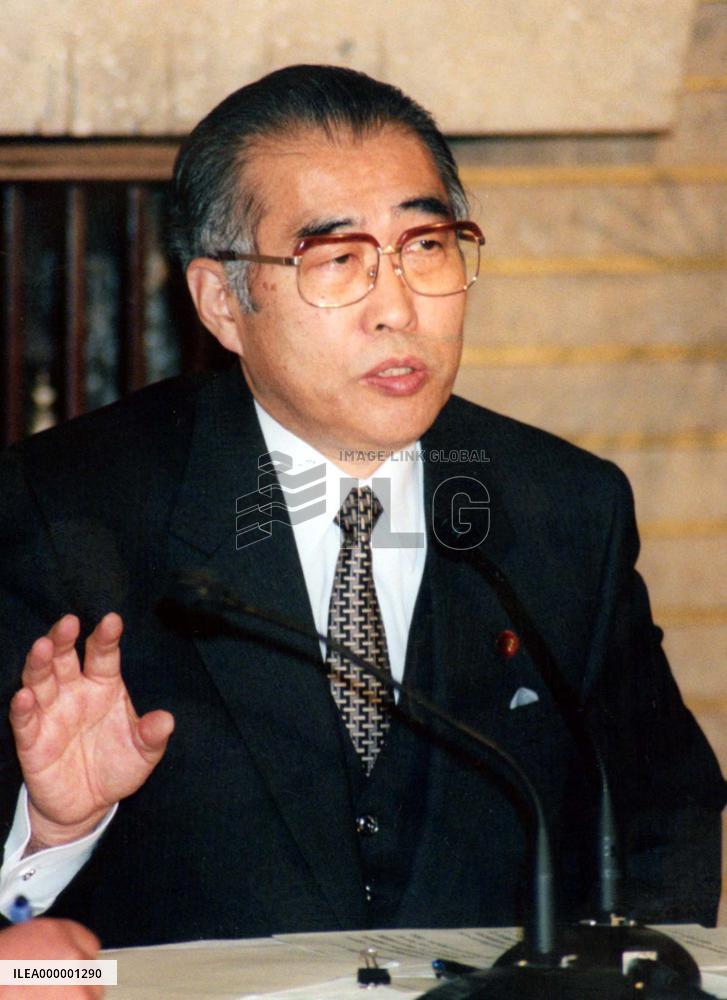 Prime Minister Keizo Obuchi, set to hold the premiership for the 19th longest period in Japan's postwar era, talks to members of the Cabinet Press Club at his official residence March 11. His term of office reaches 226 days March 12, equaling the span of Kijuro Shidehara, who served from October 1945 to May 1946. (220701) -- HONG KONG, July 1, 2022 (Xinhua) -- John Lee, chief executive of the Hong Kong Special Administrative Region (HKSAR), administers oath of office to members of the Executive Council of the HKSAR at the Hong Kong Convention and Exhibition Center, south China's Hong Kong, July 1, 2022. A meeting celebrating the 25th anniversary of Hong Kong's return to the motherland and the inaugural ceremony of the sixth-term government of the HKSAR were held here on Friday. (Xinhua/Li He) (220628) -- BEIJING, June 28, 2022 (Xinhua) -- Chinese Premier Li Keqiang, also a member of the Standing Committee of the Political Bureau of the Communist Party of China Central Committee, talks with staff members during an inspection tour to the Ministry of Civil Affairs, June 27, 2022. (Xinhua/Liu Weibing) (220619) -- DAVAO CITY, June 19, 2022 (Xinhua) -- Sara Duterte-Carpio poses for photos with her family members after taking her oath of office as the 15th vice president of the Philippines in Davao City in the southern Philippines, June 19, 2022. A lawyer and former mayor of Davao City, Duterte-Carpio will officially assume office on June 30. Her six-year term ends on June 30, 2028. Duterte-Carpio won by garnering 32.2 million votes, the highest number of votes from all national candidates, in the May 2022 elections and about twice the 16.6 million votes cast for her father in the 2016 presidential race. Duterte-Carpio will also head the Department of Education in the incoming Marcos administration. (Xinhua/Liu Kai) (220520) -- BEIJING, May 20, 2022 (Xinhua) -- Premier Li Keqiang signs a State Council decree on the appointment of John Lee as the sixth-term chief executive of the Hong Kong Special Administrative Region (HKSAR) during a State Council meeting in Beijing, capital of China, May 20, 2022. Lee will assume office on July 1, 2022. (Xinhua/Ding Lin) Canada to send troops to Poland on humanitarian mission

STORY: Canada to send troops to Poland on humanitarian mission DATELINE: April 16, 2022 LENGTH: 00:03:26 LOCATION: Ottawa CATEGORY: POLITICS SHOTLIST: 1. SOUNDBITE (English): ANITA ANAND, Canadian Minister of National Defence STORYLINE: Canadian Minister of National Defence Anita Anand announced Thursday that up to 150 Canadian Armed Forces (CAF) personnel could deploy to Poland on a humanitarian mission to support Ukrainians fleeing violence. SOUNDBITE (English): ANITA ANAND, Canadian Minister of National Defence "I am announcing today the deployment of up to 150 Canadian Armed Forces personnel with approximately 100 personnel in the immediate term who will assist Poland's efforts to support and care for Ukrainians fleeing violence. The majority will come from Edmonton and Kingston and through here in Trenton in the coming days. First, we will be deploying Armed Forces members to reception centers across Poland to assist with the immediate care and processing of Ukrainian refugees. This is the largest co