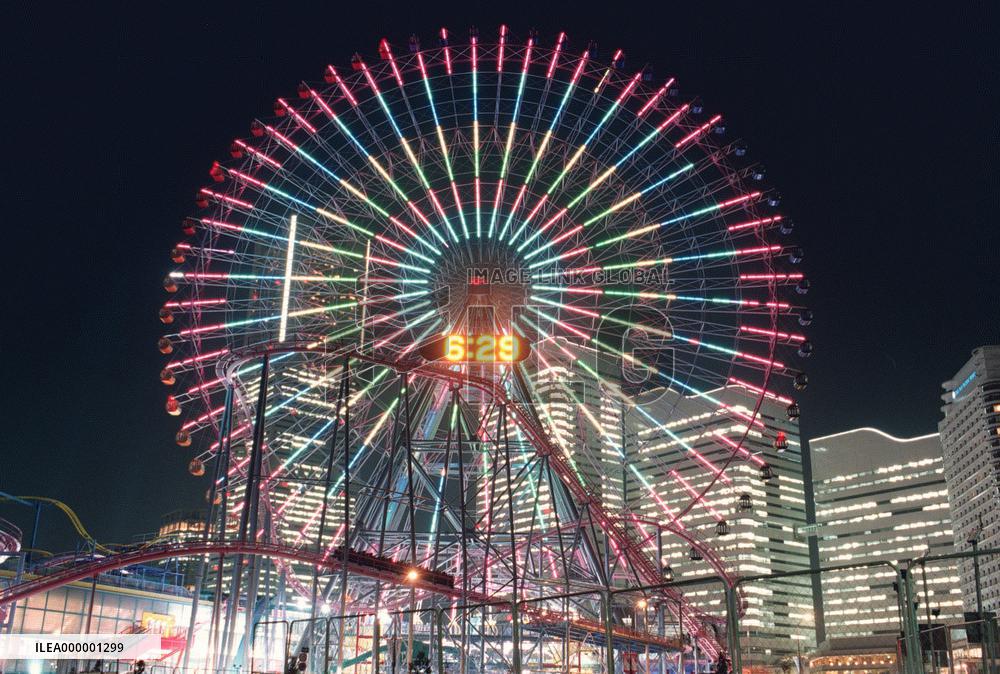 YOKOHAMA, Japan - The cityfs gCosmoclock 21h ferris wheel hoists its patrons 112.5 meters in the air for a spectacular nighttime view of the Tokyo/Yokohama metropolitan area. The giant wheel holds 60 passenger gondolas corresponding to the second-hand on a clock and makes one complete revolution every 15 minutes. Photo taken March, 16, 1999. (Kyodo) CHIBA, Japan - Firefighters gather at Narita airport near Tokyo on March 5 after an Air France passenger plane (seen in back) from Paris hit turbulence shortly before landing at the airport. Two cabin crewmembers were slightly injured. (Kyodo) TOKYO, Japan - Photo shows the house of cartoonist Kazuo Umezu in Tokyo's Musashino city. The Tokyo District Court dismissed demands by two neighbors for Umezu to remove the red-and-white stripes from his house. The plaintiffs had claimed that the house, completed in March last year and decorated with horizontal red-and-white stripes each about 50 centimeters wide, destroys the scenery. (Kyodo) TOKYO, Japan - File photo of Iwao Hakamada, 72, a former professional boxer on death row since being convicted of the 1966 murder of a family of four in Shimizu, now part of the city of Shizuoka. The Supreme Court said March 25 it has turned down a retrial plea filed by Hakamada. (Kyodo) TOKYO, Japan - KDDI Corp. said Monday it will offer three-dimensional images (in handout photo) for the ''EZ Navi Walk'' navigation service of its ''au'' mobile phone service, starting in late April. The new service will offer 3-D images of buildings and other objects within a radius of 50 meters from major intersections in Tokyo's 23 wards as well as 12 major cities including Sapporo, Yokohama, Nagoya, Kyoto, Osaka and Fukuoka, KDDI said. (Kyodo) TOKYO, Japan - Railway fans gather in the southeastern Taiwanese city of Tainan on Jan. 27 to see Taiwan's High Speed Rail 700T series passenger train, based on Japan's Shinkansen 700 Series, begin a test-run. The train will cover the 350 kilometers between Taipei and Kaohsiung in 90 minutes. (Kyodo) KASHIHARA, Japan - Photo taken from Kyodo News helicopter March 21 shows an aerial view of the remains of an artificial pond constructed in the seventh century in the village of Asuka, Nara Prefecture. The Archaeological Institute of Kashihara said the pond, one of the oldest of its kind, measures more than 200 meters long, over 70 meters wide, larger than initially expected. Archaeologists think such ponds were used to entertain foreign delegations or vassals. TOKYO, Japan - Mt. Oyama on the island of Miyakejima, south of Tokyo, is seen erupting again Aug. 29, sending smoke about 8,000 meters into the air. The photo was taken from a Kyodo News helicopter. MIYAKEJIMA, Japan - Photo, taken from a Kyodo News helicopter at 6:47 a.m. on Aug. 19, shows a motor vehicle stirring up volcanic ash on Miyakejima Island in the Izu islands chain south of Tokyo following Mt. Oyama's eruption on the evening of Aug. 18. The 813-meter volcano sent smoke more than 8,000 meters into the air, the highest altitude for any of its recent eruptions. Park inside U.S. Kadena base in Okinawa opens to locals

NAHA, Japan - The Okinawa Friendship Plaza, a park built recently in the U.S. military's Kadena Air Base in Okinawa Prefecture, is open to the public, Okinawa Mayor Masakazu Nakasone announced July 31. Visitors will be allowed entry to the plaza (shown in this photo taken July 18), which covers about 1,600 square meters, from 9 a.m. to 5 p.m. daily. The park is aimed at helping promote friendship between city residents and U.S. military personnel, and also serves as a buffer zone between the base and its surrounding area.