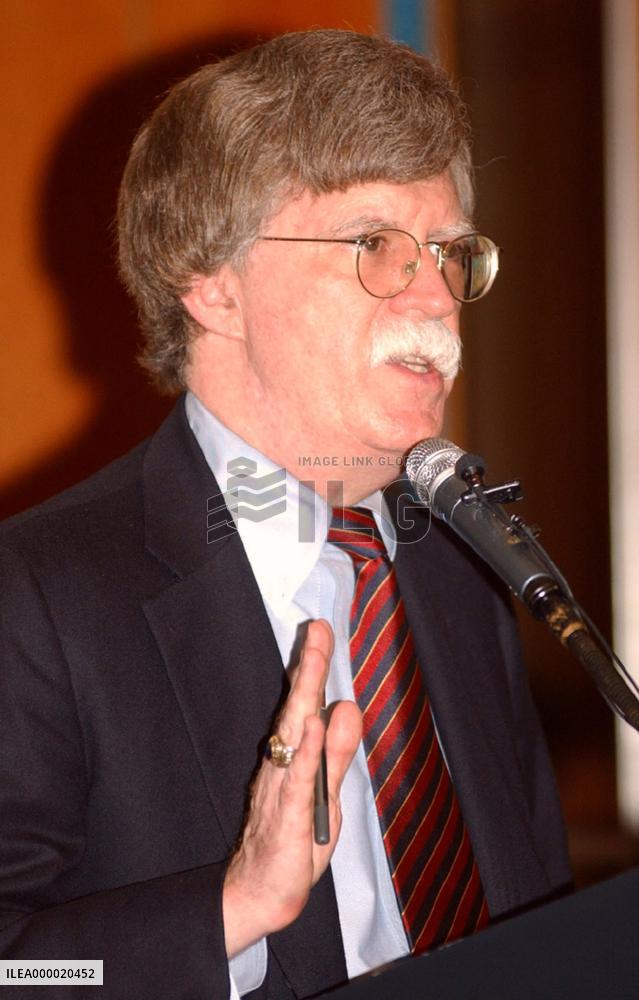 SEOUL, South Korea - U.S. Undersecretary of State for Arms Control and International Security John Bolton speaks in Seoul on July 31. He warned the United States will not countenance ''nuclear blackmail'' by North Korea and reiterated that ''all options are on the table'' to deal with the threat posed by its ''tyrannical dictator'' Kim Jong Il. (Kyodo) Foreign chiefs from the United States, Japan and South Korea hold talks in Honolulu, Hawaii, on Feb. 12, 2022. The meeting, focusing on how to deal with the threat from North Korea in the wake of a series of ballistic missile tests by the country since the start of this year, was attended by U.S. Secretary of State Antony Blinken, Japanese Foreign Minister Yoshimasa Hayashi and South Korean Foreign Minister Chung Eui Yong.

A meeting is held in Tokyo on Sept. 14, 2021, between senior diplomats from Japan, the United States and South Korea amid the growing missile threat posed by North Korea. Sung Kim (L), the U.S. special representative for North Korea, bumps elbows with his South Korean counterpart Noh Kyu Duk ahead of their talks in Seoul on Aug. 23, 2021. The top nuclear envoys of South Korea and the United States pledged to work toward an early resumption of dialogue with North Korea amid tensions with Pyongyang over ongoing military exercises between the allies. (Pool photo) File photo taken on Oct. 5, 2019, shows Kwon Jong Gun, director general of the Department of U.S. Affairs of the North Korean Foreign Ministry, in Stockholm. According to North Korea's state-run KCNA, Kwon accused the United States on June 11, 2020, of interfering in inter-Korean relations by expressing disappointment at Pyongyang's recent decision to cut off all lines of communication with South Korean authorities, an action seen as protesting at defectors to the South launching balloons over the boarder containing leaflets critical of the North. (Kyodo) ==Kyodo