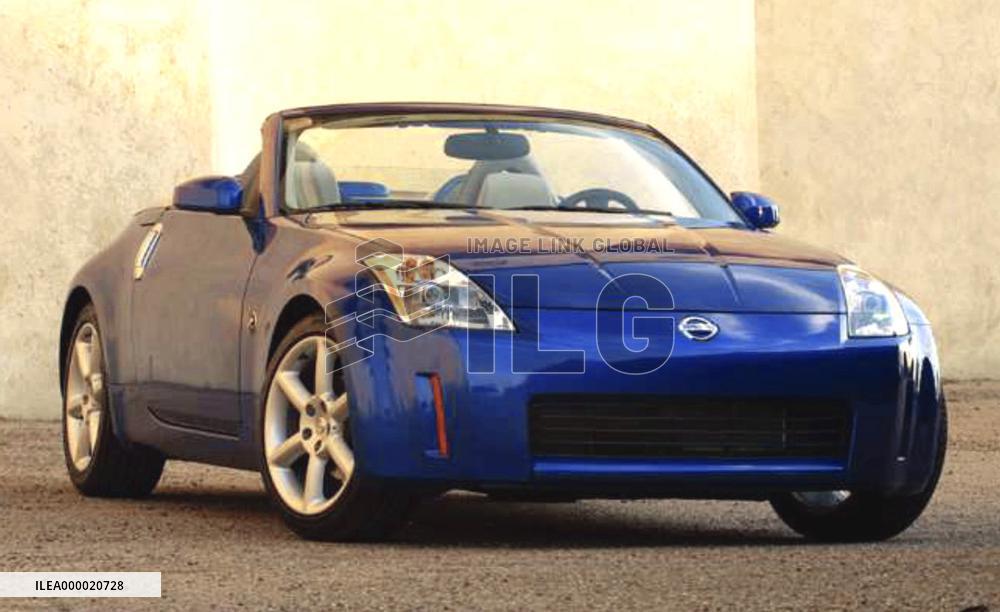 TOKYO, Japan - Nissan Motor Co. said Aug. 18 it will start taking orders for the convertible version of its Fairlady Z sports car (in handout photo) on Aug. 20. Nissan will release the Fairlady Z Roadstar this fall but has yet to announce the launch date, price and other details. In the North American market, the Fairlady Z Roadstar was released as the 350Z Roadstar earlier this month. It carries a price tag of $33,850. (Kyodo) Photo taken in Tokyo on Sept. 17, 2020, shows the Audi e-tron Sportback, Audi's first electric vehicle to be sold in Japan. The vehicle, launched by Audi Japan K.K. the same day, will carry a price tag ranging from 13.27 million yen. Toyota's Distribution Information Improvement Department has already introduced Toppan Forms' IC tags for location management to improve the efficiency of new car warehousing and inspection. It will be easier to increase the number of readers used in the vast new car yard, leading to further improvement in operational efficiency. The system can also be used as a stationary reader. The company expects to use the tags in office operations such as product lending/returning and tallying operations, and is aware that the tags will be adopted not only at manufacturing sites but also at dealerships. The photo shows a small RFID reader and an IC tag for location management (left) installed in the new car yard of Toyota's Distribution Information Improvement Department. (Photo taken on March 31, 2020, location unknown, credit: Nikkan Kogyo Shimbun / Kyodo News Images) Photo taken on Jan. 21, 2020, shows a Kintetsu Railway limited express train that has a smoking car. The company removed smoking cars at the end of the month before the coming into full force on April 1 of Japan's revised health promotion law, which includes a ban on smoking in indoor public spaces. (Kyodo) ==Kyodo Panasonic will increase its share of the domestic market for 60-inch and larger electronic blackboards to 30% (4,000 units) in fiscal 2008, up 10 percentage points from fiscal 2006, using 4K high-definition touch-screen LCD displays. The estimated market price is 600,000 yen (excluding consumption tax) for the 65-inch model and 1,400,000 yen for the 75-inch model. A new "comparison mode" that can display up to nine screens has been added so that multiple opinions can be shown on the display and shared in group learning. Up to four teaching materials can be displayed so that digital textbooks can be used effectively. It has acquired "Color Universal Design Certification" for its color scheme, which is distinguishable even by people with color blindness. Sharp (36%), Panasonic (25%), and NEC (16%) hold the largest share of the domestic market for commercial displays. (Photo taken on January 17, 2020, location unknown, credit: Nikkan Kogyo Shimbun / Kyodo News Images) Taking a hint from the fact that insects find flowers by the wavelength and light intensity of sunlight, the company has developed an "insect eye sensor" that tracks sunlight. It efficiently collects sunlight. The six optical fibers can be extended up to one kilometer and can illuminate 500 square meters. It is about 2 meters long, 2 meters wide and 2.5 meters high. The price starts at 5 million yen (excluding consumption tax). It has been used in buildings and train stations in Kumamoto Prefecture, and its sales have been about 100 million yen. It can also be used to cut infrared rays and ultraviolet rays. The company is currently producing them overseas, but will switch to domestic production within this year. The price will start at 250,000 yen (same as above). "The market for solar concentrators is worth about 20 billion yen. President Yokozawa hopes to capture a 20% share of this market. (Photo taken on December 19, 2019, location unknown, credit: Nikkan Kogyo Shimbun / Kyodo News Images) 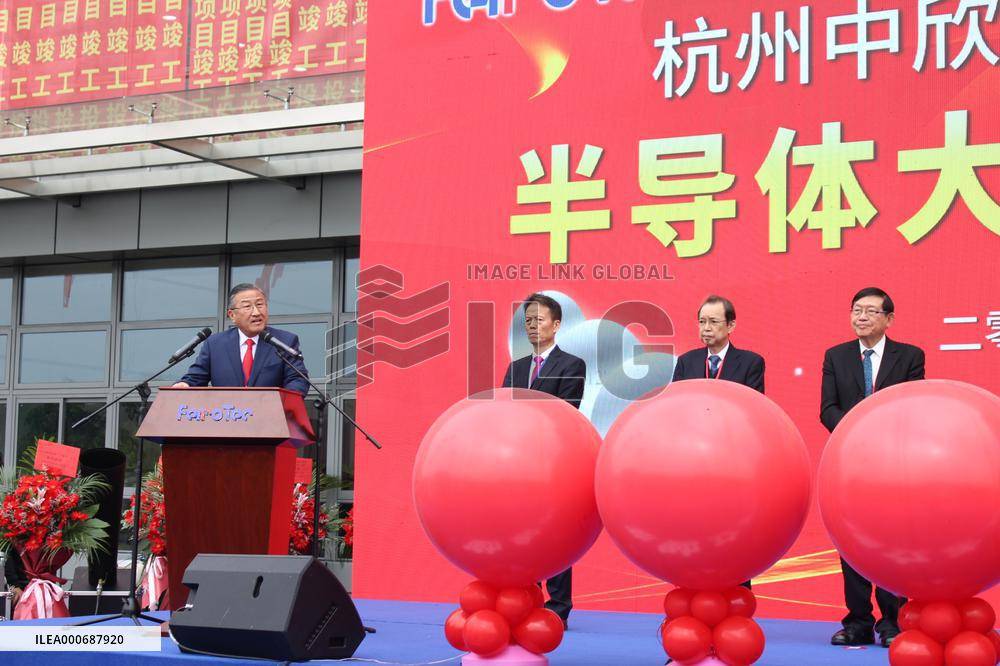 Ferrotec Holdings (HD) will start mass production of 8-inch wafers at its new plant in Hangzhou, China by January to March 2020. The company plans to produce about 100,000 wafers per month. This is the first time for the company to build a line for 12-inch wafers. The company is already mass-producing 100,000 wafers of 8-inch silicon wafers at its Shanghai Plant in Shanghai City.The opening ceremony of the new plant (photo) was held on the 22nd. The ceremony was attended by about 450 people, including local government officials. Mr. Ka Xianghan, Vice President of Ferrotec HD, who oversees the company's business in China, said, "Due in part to the impact of the trade friction between the U.S. and China, domestic production is advancing, especially in the high-tech field. We will also expand our supply to contribute to the expansion of the Chinese market," he said. (November 22, 2019, Hangzhou, China; Credit: Nikkan Kogyo Shimbun / Kyodo News Images) Toshiba is planning to commercialize the next generation of its proprietary SCiB lithium-ion rechargeable batteries in fiscal 2020 or later, with an energy density that is more than 50% higher than that of conventional products. The company has already developed a prototype cell at its research laboratory and will establish mass production technology. While SCiBs are strong in terms of longevity and fast charging performance, energy density, which leads to higher battery capacity, has been an issue. The company aims to expand its business by focusing on hybrid vehicles (HV), railroads and stationary applications. However, in the lithium-ion battery market as a whole, major manufacturers in Japan, China and South Korea are competing with each other. Toshiba's strategy is to target a "niche top" market by narrowing down the target market because price competition is not in Toshiba's favor. (Photo taken on November 15, 2019, credit: Nikkan Kogyo Shimbun / Kyodo News Images) Hamabe Seisakusho has installed a punch/fiber laser multifunction machine at its main factory, which will be operational within the month. The investment will amount to 200 million yen. The combined punch and fiber laser machine will be operated unmanned 24 hours a day, including die changes, to improve processing efficiency and save manpower. The machine is also equipped with a material feeder and product accumulator, which automatically feeds six types of materials at the right time to handle small-lot, high-mix sheet metal processing. With the introduction of a punch/fiber laser multifunction machine, the company aims to increase productivity in sheet metal processing, improve its ability to respond to single-part orders and short delivery times, and also acquire new orders. Photo taken on October 29, 2019, credit: Nikkan Kogyo Shimbun / Kyodo News Images Top Water Systems (Ota-ku, Tokyo) will develop a new, smaller and lower-priced version of its TOP Rescue RO II (photo), a mobile water purification system for use during disasters. The company aims to complete the product by June 2020, with a sales target of 100 units for the first year. The size is expected to be less than one-third of the conventional models. The RO II is priced at 6 million yen (excluding consumption tax), and the new product aims to be priced at less than 1 million yen. We will continue to sell the ROII as our main product, but we will expand the market by adding compact products that can be installed in any location, including homes, in order to create a synergistic effect. The RO II has been improved to supply not only water for domestic use and drinking, but also sanitary water for medical use. (Photo taken on October 17, 2019,credit: Nikkan Kogyo Shimbun / Kyodo News Images) Photo taken Aug. 5, 2019, in New York shows Samsung Electronics Co.'s new Galaxy Note 10 Plus smartphone and stylus, unveiled ahead of its launch at the end of the month in the United States and South Korea. (Kyodo) ==Kyodo