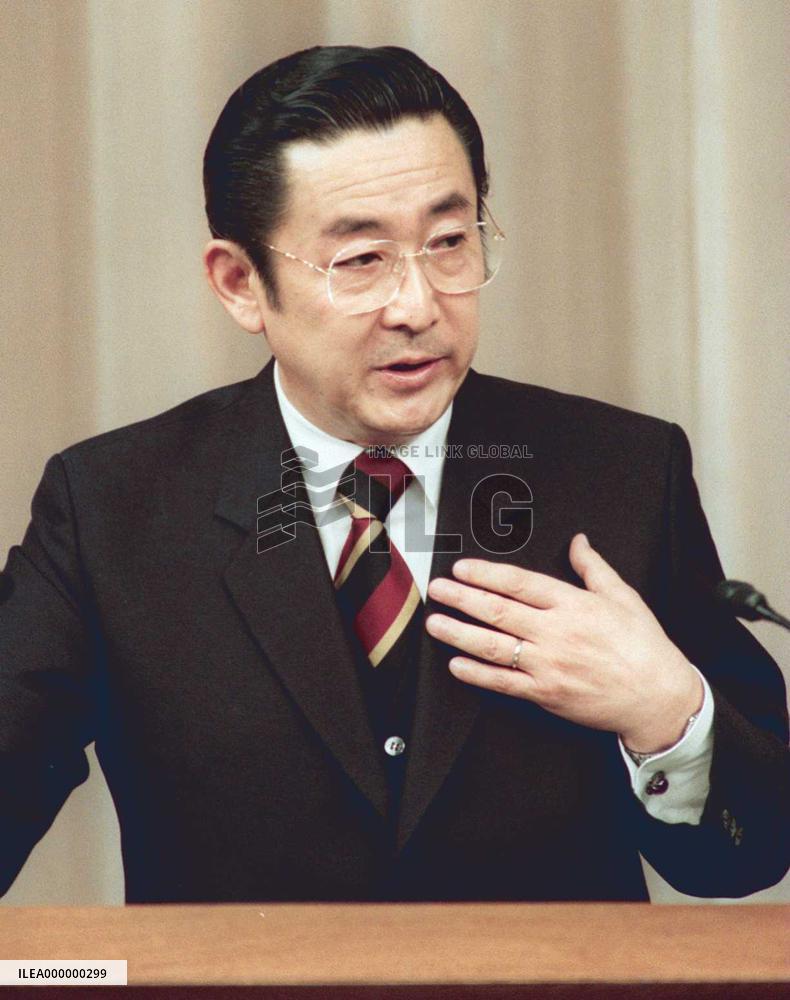 Prime Minister Ryutaro Hashimoto meets the press at his official residence in Tokyo on April 9 and pledges 4 trillion yen tax cuts as part of a package of stimulus measures to boost the sagging economy.

STORY: Spain reduces sales tax on gas to 5 pct DATELINE: Sept. 13, 2022 LENGTH: 00:01:17 LOCATION: BARCELONA, Spain CATEGORY: SOCIETY/ECONOMY SHOTLIST: 1. various of a gas cooker and a consumer with a gas bill 2. various of Spanish Prime Minister Pedro Sanchez 3. various of tanks and facilities of gas companies 4. SOUNDBITE (Spanish): RUBEN SANCHEZ, Secretary-General, Spanish consumer association Consumers in Action (FACUA) 5. various of gas tanks in port and ships carrying gas STORYLINE: Spanish government decided to reduce the sales tax on gas from 21 to 5 percent. According to authorities, the anti-inflation measure will come into effect in October and will be in force until December 31, and could be extended into 2023. According to Spain's two largest consumer rights organizations, Consumers in Action (FACUA) and Organization of Consumers and Users (OCU), depending on the type of contract and the level of gas consumption, many households could experience monthly savings of between 5 and 19 euros. Ac

STORY: Greece presents energy-saving measures for public sector DATELINE: Sept. 8, 2022 LENGTH: 0:00:52 LOCATION: Athens CATEGORY: SOCIETY SHOTLIST: 1 various of streets views STORYLINE: The Greek government presented on Wednesday a package of energy-saving measures in the public sector as part of wider efforts to address the current energy crisis and act against climate change. It is aimed to reduce energy consumption in the public sector by 10 percent in the coming months and by 30 percent by 2030, Environment and Energy Minister Kostas Skrekas told a press conference on Wednesday. Organizations meeting the targets will be awarded extra funds, while those lagging behind will not get funding for new hirings. A digital energy consumption monitoring system will also be launched, and all public entities should appoint energy managers for each of their buildings to make sure lights and devices are switched off when not in use and heating and cooling systems are properly maintained. Moreover, m

STORY: Biden signs Democratic bill on tax, health care, climate DATELINE: Aug. 18, 2022 LENGTH: 00:00:56 LOCATION: Washington D.C. CATEGORY: POLITICS/ECONOMY SHOTLIST: 1. various of Biden signing the bill 2. various of exterior of the White House STORYLINE: U.S. President Joe Biden on Tuesday signed into law the Inflation Reduction Act, a scaled-down version of the massive "Build Back Better" package he and many Democrats envisioned last year. Touting it as a "historic bill," Biden said at the White House that it will lower costs for American families, combat the climate crisis, reduce the deficit, and finally make the largest corporations pay their fair share in taxes. The bill includes a roughly 400-billion-U.S.-dollar investment in fighting climate change, measures to make prescription drugs more affordable, and a 15-percent minimum tax on most corporations that make more than 1 billion dollars per year. The legislation would generate nearly 300 billion dollars of net revenue over a decade. STORY: Tunisia's discount season sluggish due to weak purchasing demand DATELINE: Aug. 8, 2022 LENGTH: 00:01:00 LOCATION: Tunis CATEGORY: ECONOMY SHOTLIST: 1. various of shopping malls in Tunisia STORYLINE: Tunisia's six-week summer discount season starting from July 4 remains sluggish amid one of the worst crises in decades. However, local media reported that due to the sluggish economy, the purchasing demand of local people has declined and this year's discount season has been ignored by many. The Tunisian economy has gone from bad to worse in recent years. While the economy has struggled since the Arab Spring uprising in 2011, its problems are aggravated by the COVID-19 pandemic that broke out in 2020, when Tunisia's gross domestic product (GDP) contracted by an unprecedented 8.8 percent. In April 2021, Tunisia started to seek a 4-billion-U.S. dollar loan from the International Monetary Fund (IMF), which was described by then Prime Minister Hichem Mechichi as the "last opportunity" to rescue the c