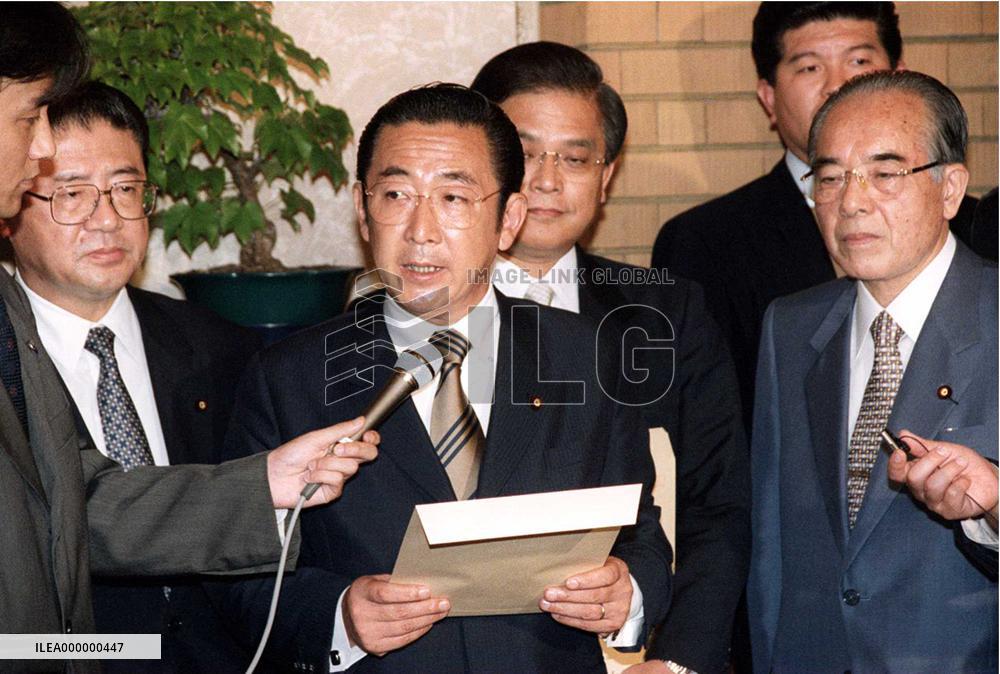 Prime Minister Ryutaro Hashimoto (C) tells reporters at his official residence in Tokyo on June 30 that he is in favor of a scheme to establish a state-funded institution to handle the administrative duties of ''bridge banks'' that would take over the loan portfolios of troubled banks.

STORY: Egypt's CBE offers short-term T-bills for 35 bln EGP DATELINE: Jan. 23, 2023 LENGTH: 00:00:45 LOCATION: Cairo CATEGORY: ECONOMY SHOTLIST: 1. exterior shots of the central bank 2. various of an employee counting Egyptian banknotes 3. various of banks STORYLINE: The Central Bank of Egypt (CBE) offered treasury bills (T-bills) with a combined value of 35 billion EGP through two auctions on Sunday. The first offering is valued at 13.5 billion EGP, carrying a 91-day maturity period, according to official data. The second offering is valued at 21.5 billion EGP, with a maturity period of 273 days. On Thursday, the CBE issued T-bills with an aggregated value of 43.5 billion EGP through two auctions. Egypt is set to receive the second tranche of the 3 billion U.S. dollars loan it secured from the International Monetary Fund (IMF), estimated at around 347 million U.S. dollars, by the end of March, following the completion of the first review of the loan program. The IMF approved in December a 46-month lo

STORY: Egypt's currency further declines against USD DATELINE: Jan. 5, 2023 LENGTH: 00:01:05 LOCATION: Cairo CATEGORY: ECONOMY SHOTLIST: 1. various of national banks in Egypt 2. various of citizens 3. various of banknotes STORYLINE: The Egyptian pound further weakened against the U.S. dollar whose exchange rate jumped Wednesday from about 24.7 to about 26.49 pounds, according to data on the website of the Central Bank of Egypt (CBE). It is the largest single-day decline of the Egyptian pound's value since the CBE allowed it to drop by about 14.5 percent in late October 2022. The country devalued its currency twice in 2022. The move complies with the country's "shift to a durable exchange rate regime" to contain inflation as a key demand of the International Monetary Fund (IMF), which has recently approved a loan of 3 billion dollars to Egypt to support its economic and structural reforms. The IMF's support package also includes measures to be implemented by Egypt to "reduce the state's footprin

STORY: Israeli elections committee bars Arab party from running in upcoming elections DATELINE: Sept. 30, 2022 LENGTH: 00:00:55 LOCATION: Jerusalem CATEGORY: POLITICS SHOTLIST: 1. various of Jerusalem street views 2. various of last elections STORYLINE: An Israeli-Arab party was disqualified from running in the country's November elections over allegations of promoting an anti-Israel agenda. With nine members voting in favor and five against, Israel's Central Elections Committee said in a statement that it accepted the request to disqualify Balad on the basis that the party allegedly supports the cancellation of Israel as "a Jewish and democratic state." Balad, acronyms in Hebrew for "National Democratic Alliance," announced in a separate statement that it will appeal to the Supreme Court against the decision. Sami Abu Shehadeh, the party leader, denounced the decision as "an attempt by (Defense Minister Benny) Gantz and (caretaker Prime Minister Yair) Lapid to engineer an Arab leadership according to t (220928) -- ZHENGZHOU, Sept. 28, 2022 (Xinhua) -- Combo photo taken on Sept. 21, 2022 shows auspicious cloud patterns on stone murals discovered in the Zhouqiao relics site in Kaifeng City, central China's Henan Province. Two stone murals from the Northern Song Dynasty (960-1127) have been unearthed in Henan Province, which are the largest of their kind ever found in the country, archaeologists said Wednesday. The murals, discovered in the Zhouqiao relics site in Kaifeng City, are symmetrically distributed along the northern and southern banks at the east side of the Zhouqiao Bridge. The murals are 3.3 meters in height, and it has been revealed that the excavated length of the south bank mural is 23.2 meters, while that of the northern one is 21.2 meters. The stone murals are engraved with auspicious patterns of traditional Chinese culture such as seahorses, flying cranes and clouds. Further excavation and cleanup work is still in progress, said Zhou Runshan, head of the excavation project, adding t

STORY: Cooperation with China helpful in solving Nigerian security challenges: minister DATELINE: May 20, 2022 LENGTH: 00:01:16 LOCATION: Abuja CATEGORY: POLITICS SHOTLIST: 1. various of Mohammed Maigari Dingyadi, the Minister of Police Affairs along with other officials at the press briefing 2. various of police officers (file) 3. various of Mohammed Maigari Dingyadi delivering a speech STORYLINE: A Nigerian minister on Thursday said that the cooperation with China has been helpful in solving some challenges plaguing the West African country, especially in security sector. The Minister of Police Affairs Mohammed Maigari Dingyadi told reporters at the State House in Abuja that the Chinese government had been supportive of the provision of surveillance equipment to improve security in trouble spots across the country. SOUNDBITE (English): MOHAMMED MAIGARI DINGYADI, Minister of Police Affairs "We are relating a lot with China, like you are aware. The CCTV (closed-circuit television) cameras were financed t

More than 460 extremist militants surrender to troops in NE Nigeria

STORY: More than 460 extremist militants surrender to troops in NE Nigeria DATELINE: Feb. 26, 2022 LENGTH: 00:01:14 LOCATION: Abuja CATEGORY: MILITARY SHOTLIST: 1. various of military operations in NE Nigeria 2. various of press conference at the defense headquarters 3. SOUNDBITE (English): BERNARD ONYEUKO, Military spokesman STORYLINE: A total of 466 extremist militants have surrendered to troops in Nigeria's northeast region in the past two weeks, the military said Thursday. The militants of the Boko Haram and Islamic State's West Africa Province (ISWAP) groups surrendered during various operations carried out by troops between Feb. 10 and Thursday, Bernard Onyeuko, a spokesman for the military, told reporters in Abuja, the Nigerian capital. SOUNDBITE (English): BERNARD ONYEUKO, Military spokesman "This led to the surrender of 466 Boko Haram and Islamic State of West African Province, terrorists and their families comprising of 120 adult males, 137 adult females, and 209 children with the claim t TOKYO, Japan - Koichi Kato, a former secretary general of the ruling Liberal Democratic Party (LDP), answers questions from reporters near his residence in Tokyo's Minami-Aoyama on the mroning of Nov. 20. Kato and his close ally Taku Yamasaki, a former LDP policy chief, have said they will vote in favor of an oppotition-tabled no-confidence motion against Prime Minister Yoshiro Mori's cabinet. Japanese Prime Minister Ryutaro Hashimoto takes off his glasses as he winds up a press conference at his official residence Thursday June 18. He pledged to resolve the bad-loan problem of Japanese banks to spur the national economy and restore market confidence.