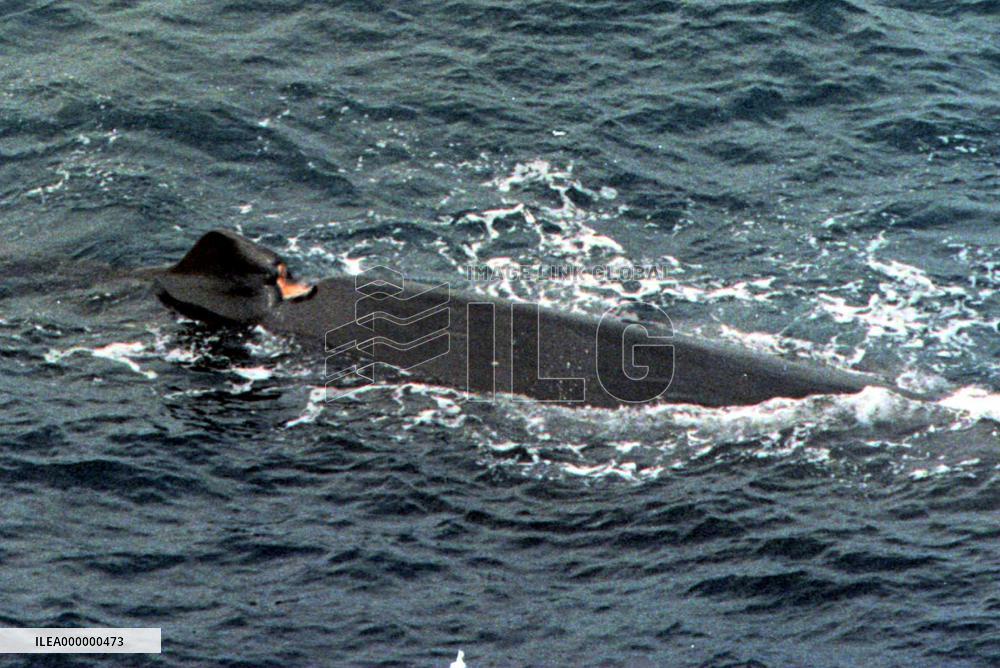 A pleasure fishing boat collided with a whale in Tokyo Bay on July 9, injuring seven people, one seriously. The photo taken from a Kyodo News helicopter shows the sperm whale wounded on the back near its tail fin. Micah Hendler speaks in Tokyo about his work of leading a Jerusalem-based choir of young Jewish and Palestinian people, as seen in this file photo taken on Aug. 18, 2014. (Kyodo) ==Kyodo TOKYO, Japan - A fishing boat is left abandoned on a desert created by the recession of the Aral Sea, once the world's fourth largest lake, in the suburbs of Aral, Kazakhstan, as seen in this file photo take in April 2010. (Kyodo) TOKYO, Japan - File photo shows Argentina coach Diego Maradona giving instructions to his men during a 2010 World Cup quarterfinal against Germany on July 3, 2010, in Cape Town. Maradona will leave the team following a unanimous vote by the Argentine Football Association in its board meeting not to renew his contract. (Kyodo) SHIZUOKA, Japan - People admire a ''life-size'' statue of Gundam, a fictitious combat robot in the Japanese sci-fi animation series, near JR Higashi-Shizuoka, southwest of Tokyo, on July 23, 2010. The local community expects the creation featuring the popular anime robot will draw many tourists during an event through March 2011. (Kyodo) TOKYO, Japan - Photo taken Jan. 20, 2010, shows a factory operated by Tianyang Food Plant based in northern China's Hebei Province. Chinese authority announced on March 26, 2010, that Chinese police have detained a 36-year-old man, who was a temporary employee at the plant, on suspicion of poisoning frozen dumplings which were later exported to Japan and sickened 10 people in 2008. (Kyodo) TOKYO, Japan - Repatriated abductee Kaoru Hasuike (file photo) won an award Aug. 27, 2009, for a nonfiction work that features his experience of being abducted to North Korea and living in the reclusive country. Hasuike went missing along with his girlfriend, Yukiko Okudo, in Niigata Prefecture in July 1978, and returned to Japan in October 2002 with Okudo, to whom he got married in North Korea, after Pyongyang admitted to past abductions of Japanese citizens. (Kyodo) TOKYO, Japan - Japanese Emperor Akihito shakes hands with people who gathered in front of British Columbia's Parliament in Victoria, Canada, July 11. The emperor, who stayed his first night ever overseas in Victoria 56 years ago, reportedly described the provincial capital as ''a special city for me.'' (Kyodo) OTTAWA, Canada - Japanese Emperor Akihito (L) and Empress Michiko talk to representative of a group of Japanese descendants and nationals during an event at the residence of the Japanese ambassador to Canada in Ottawa on July 5. (Pool photo) (Kyodo) WAKAYAMA, Japan - A sperm whale, which had remained in a shallow bay in Wakayama Prefecture since mid-May, returns to the Pacific off Tanabe in the prefecture on June 1. People living nearby and animal lovers had become concerned as the 15-meter whale appeared weak and apparently unable to find a way out of the bay despite a series of unsuccessful rescue attempts. (Kyodo)