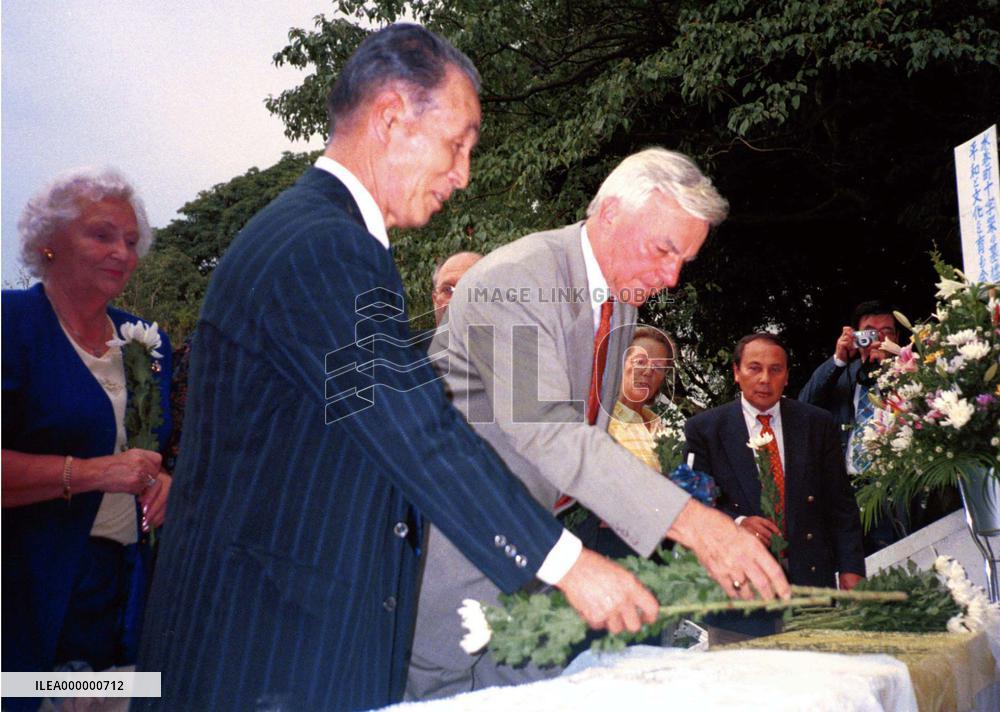 Family members of Dutch who died in Japan during World War II lay flowers Wednesday Oct. 14 at a memorial cross honoring 869 Dutch war dead in Mizumaki, Fukuoka Prefecture, in southwestern Japan. The cross originally marked the deaths of 53 Dutch prisoners who were brought to Mizumaki to work in the town's coal mine. The firm running the colliery put up the marker before Allied occupation troops arrived to conduct a probe into their deaths.

Niimi, lawyer who fought for Chinese laborers' rights, dies at 59

TOKYO, Japan - Takashi Niimi (in undated file photo), a human rights lawyer who represented the rights of Chinese nationals who were forced to work at a labor camp in Akita Prefecture during World War II, died of cardiac failure on Dec. 20, his family said. He was 59. Niimi, a Nagoya native, led a five-year court battle against major Japanese construction firm Kajima Corp. through November 2000 over a 60.5 million yen damages suit filed by 11 of the survivors. NAGANO, Japan - The Nagano District Court dismissed on March 10 a damages suit filed by a group of former Chinese laborers, and family members of those already deceased, who were forced to work under harsh conditions at a construction site in Nagano Prefecture during World War II. After rejecting the plaintiffs' demand for 140 million yen in compensation, Presiding Judge Jiro Tsuji took the unusual step of offering a personal observation, ''Preceding generations did some terrible things, and I wish I could offer (the plaintiffs) some relief.'' (Pool photo) (Kyodo) TOKYO, Japan - Three Japanese ''war orphans'' who were left behind by their families in China in the closing days of World War II arrive in Japan on Nov. 11 to meet with possible relatives. The three from left are Chen Jingyun, Zhu Guiqin and Wei Qingling. They will take part in face-to-face meetings starting Nov. 12 with their possible family members. NAGASAKI, Japan - File photo taken July 17 shows Yasunori Takazane, professor at Nagasaki University, standing at the ruins of a coal mine on Hashima Island in Nagasaki Prefecture, where Chinese laborers were forced to work during World War II. A civic group headed by Takazane will visit China in August to interview some of those Chinese workers or their family members.