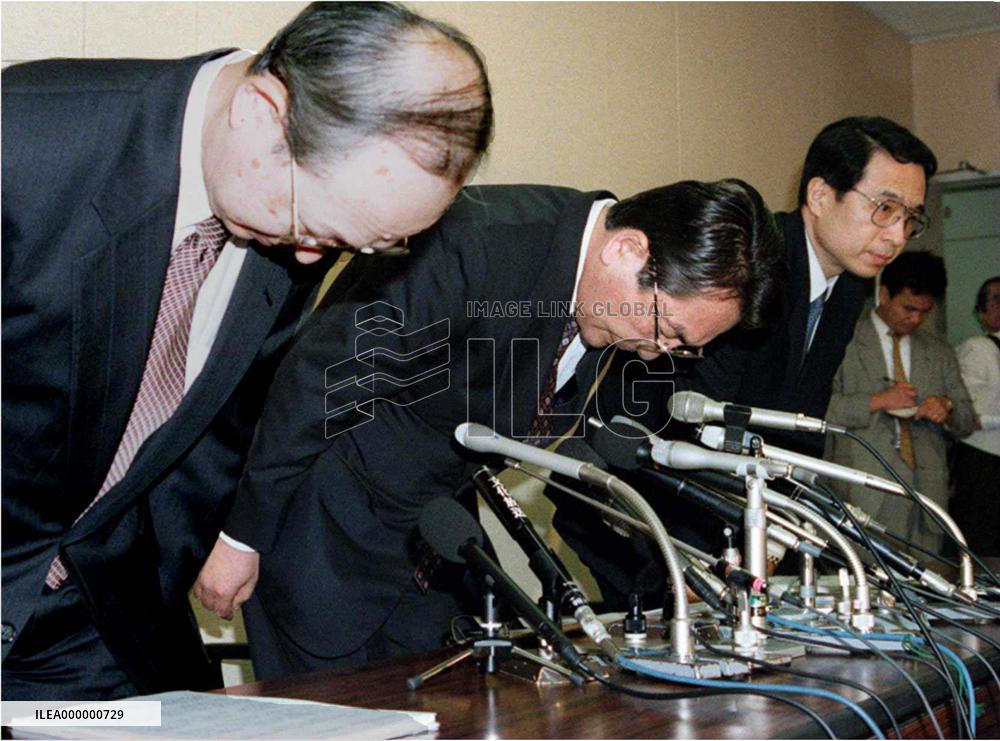 Tsuneo Suzuki (C), president of the Long-Term Credit Bank of Japan (LTCB), flanked by other bank executives, offers an apology to shareholders and clients in Tokyo on Oct. 23 for any inconveniences the bank's decision to come under state control has brought. The LTCB, one of three Japanese long-term credit banks, is the first bank to be nationalized under a law enacted earlier this month to avoid the possibility of its severing credit lines to its corporate borrowers and defaulting on its obligations to creditors. TOKYO, Japan - Katsunobu Onogi, 72, a former president of the failed Long-Term Credit Bank of Japan, now Shinsei Bank, is surrounded by reporters outside the Supreme Court in Tokyo on July 18 after the top court overturned a lower court ruling and acquitted him and two former LTCB vice presidents indicted for window-dressing the bank's financial statements to conceal massive bad loans and authorizing illegal dividend payments. (Kyodo) TOKYO, Japan - Nippon Credit Bank (NCB) opens Sept. 4 for its first official day of business under the ownership of a consortium led by Internet investor Softbank Corp., following 21 months of state control that ended Sept. 1. The new management is expected to adopt a plan to rename the institution Aozora Bank in January 2001. Aozora means ''blue sky'' in Japanese. Photo shows new NCB executives (from L to R) of Kokei Higuchi, president of Tokio Marine & Fire Insurance Co., Masayoshi Son, president of Softbank Corp., Tadayo Homma, a former executive director of the Bank of Japan, who is expected to become president of the new bank, and Yoshihiko Miyauchi, chairman of Orix Corp. TOKYO, Japan - Masamoto Yashiro, president of the Long-Term Credit Bank of Japan (LTCB), arrives at the office of the government's Financial Reconstruction Commission (FRC) on March 3 to file a formal request for an injection of taxpayers' money to strengthen the bank's capital bases. LTCB, which New LTCB Partners CV. (NLP), a group of financial companies led by U.S. fund Ripplewood Holdings LLC, has just bought from the government, is seeking 240 billion yen in public funds. TOKYO, Japan - Hideyuki Suzuki (C), former vice president of the failed Kokumin Bank, is arrested in Tokyo on Nov. 30 on suspicion of dubious lending to a Tokyo karaoke-parlor management company. Suzuki, 66, was nabbed along with Yukio Okonogi, 66, president of the second-tier regional bank when the loans were made and two other former bank executives. Takashi Anzai, new president of the Long-Term Credit Bank of Japan (LTCB), speaks at a news conference in Tokyo on Wednesday Nov. 4. The ailing LTCB began operating as a nationalized bank under new management in a first step toward disposing of its bad loans under banking legislation enacted last month. The House of Councillors on Oct. 12 passes into law a set of banking reform bills designed to fix the nation's ailing banking sector, with 198 out of 237 voting for the bills. The passage of the bills paved the way for the government to put the troubled Long-Term Credit Bank of Japan (LTCB) temporarily under state control with share purchases. Finance Minister Kiichi Miyazawa is seated front right. ==Kyodo Hiroaki Okamoto (C), president of Japan Leasing Corp., one of three nonbank affiliates of the ailing Long-Term Credit Bank of Japan (LTCB), bows his head low Sept. 28 at the end of a press meeting. He said Japan Leasing went bankrupt as it filed for court protection from its creditors under the Corporate Rehabilitation Law. ==Kyodo Katsunobu Onogi (R-center), president of the Long-Term Credit Bank of Japan, meets the press at the Bank of Japan in Tokyo on June 26 after an announcement that his bank has agreed to start talks on a merger with Sumitomo Trust and Banking. The LTCB has long been plagued with massive nonperforming loans.