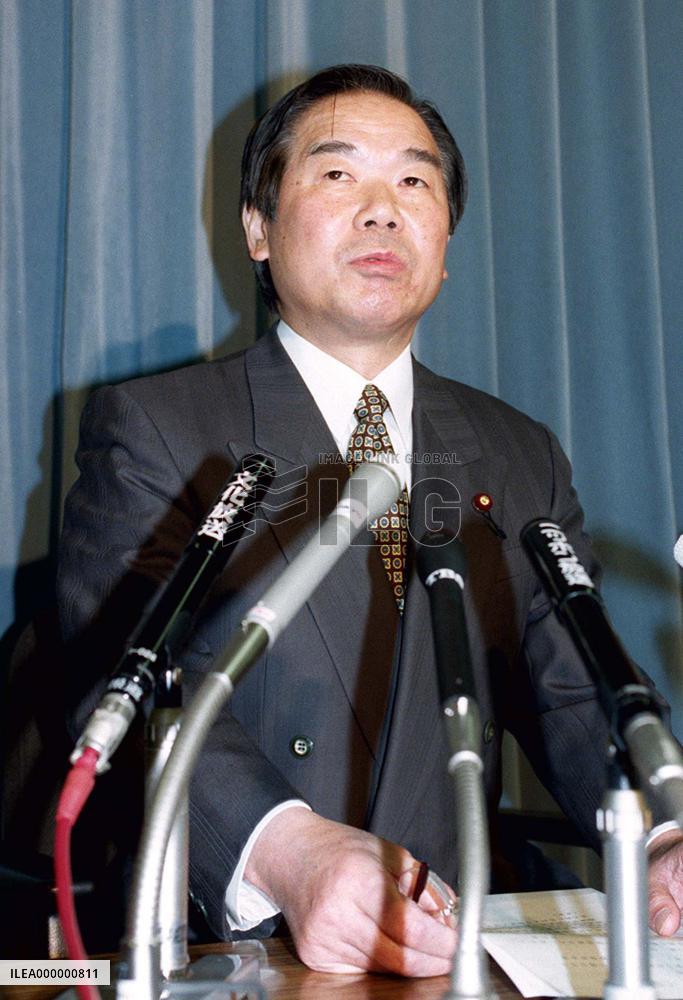 Defense Agency chief Fukushiro Nukaga meets press after tendering his resignation to Prime Minister Keizo Obuchi on Nov. 20 to take responsibility for the agency's systematic cover-up of evidence of its involvement in a procurement scandal. ==Kyodo TOKYO, Japan - Eiji Tokuno, head of the Unification Church in Japan, reads out a statement during a press conference at a hotel in Tokyo on July 13. Tokuno announced his resignation to take responsibility for stirring public concern after some church members were arrested and indicted for allegedly selling expensive personal seals by telling people they would suffer bad fortune if they did not buy the items. (Kyodo) TOKYO, Japan - Alfred N. Schindler (L), chairman of Swiss elevator maker Schindler Holding Ltd., attends a press conference in a Tokyo hotel on May 8. While offering his condolences, Schindler denied criminal responsibility for a 2006 accident in which a teenage boy was killed by a malfunctioning elevator made by the company. (Kyodo) TOKYO, Japan - Alfred N. Schindler (L), chairman of Swiss elevator maker Schindler Holding Ltd., bows to reporters at a press conference in a Tokyo hotel on May 8. While offering his condolences, Schindler denied criminal responsibility for a 2006 accident in which a teenage boy was killed by a malfunctioning elevator made by the company. (Kyodo) TAIPEI, Taiwan - Taiwan's top envoy to China Chiang Pin-kung (in this file photo) said May 6 that he wants to quit his post as chief of the semigovernmental agency Straits Exchange Foundation. (Kyodo) TOKYO, Japan - Farm minister Norihiko Akagi speaks to reporters after his resignation was accepted by Prime Minister Shinzo Abe on Aug. 1. Akagi said he offered to resign to take responsibility for damage his political fund scandal caused to the governing coalition in the upper house election. (Kyodo) TOKYO, Japan - Lawyer Koken Tsuchiya speaks at a press conference in Tokyo on June 18. He said he has taken procedures to revert the ownership of the properties of the pro-Pyongyang General Association of Korean Residents in Japan, or Chongryon, on an official registry from a company headed by Shigetake Ogata, a former chief of the government's intelligence agency, indicating that a plan to sell the properties to the company has been abandoned. (Kyodo) SEOUL, South Korea - Residents of North Korea's North Pyongan Province are engaged in farming in a photo taken in late by the U.N. World Food Program. Jean-Pierre DeMargerie, head of the U.N. agency, who made a five-day trip to the North from last Friday, called on the international community to increase food aid to North Korea at a press conference in Seoul on March 29. (Kyodo) WAKAYAMA, Japan - Wakayama Gov. Yoshiki Kimura announces his intention to resign at a press conference at the prefectural government office on Nov. 2. He said he will step down to take responsibility for bid-rigging scandals involving a former senior prefectural official. (Kyodo) BEIJING, China - World Food Program chief James morris speaks at a press conference in Beijing after his trip to North Korea on Dec. 15. Morris said WFP will continue deliberations on the U.N. agency's future role in the impoverished country. (Kyodo)