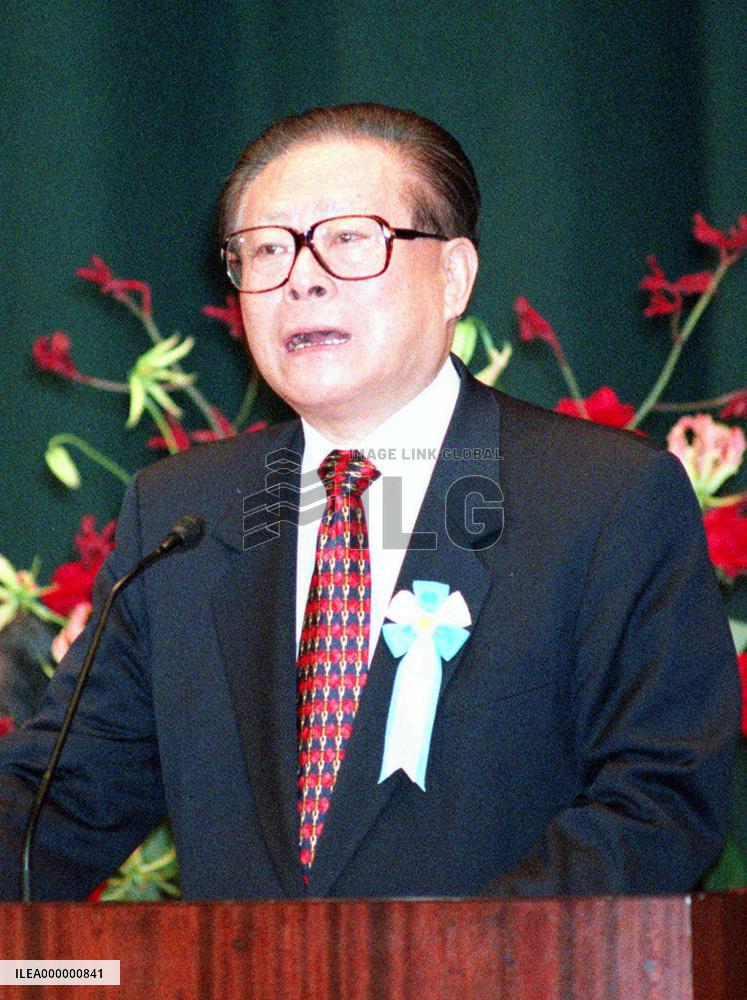 A warning from the stage

Chinese President Jiang Zemin delivers a speech at Tokyo's Waseda University on Nov. 28, calling on Japan to guard against the rebirth of militarism. Jiang called himself a ''witness'' to Japan's 1937-1945 aggression against China, and said Japan must teach its youth about the country's past and never allow the revival of militarism ''in any form.'' ==Kyodo BEIJING, China - Takenori Kanzaki (L), leader of the New Komeito, the No. 2 party in Japan's tripartite ruling coalition, meets with Chinese President Jiang Zemin in Beijing on Nov. 23. Kanzaki will return home on Nov. 24 via Shanghai and report on his visit to China to Prime Minister Keizo Obuchi.

Chinese ibises to arrive in Japan this month

A pair of crested ibises, an endangered bird, are expected to arrive in Japan from China around the end of January to help Japan's efforts to breed the birds, the Japanese Environment Agency said Jan. 9. Chinese President Jiang Zemin promised Emperor Akihito during his visit to Tokyo last November that China will present the two crested ibises, which were artificially bred in the country. The photo shows the pair of crested ibises -- male You You and female Yang Yang. ==Kyodo Chinese President Jiang Zemin (C) makes a speech at a reception hosted by Miyagi Gov. Shiro Asano (R) and Sendai Mayor Hajime Fujii (L) at a Sendai hotel on Nov. 28. Jiang arrived in Sendai, northeastern Japan, earlier in the day via Shinkansen bullet train after concluding the Tokyo portion of his six-day visit to Japan. ''Obande gozaimasu (good evening),'' the Chinese president said in the dialect of Tohoku, northeastern Japan, at the opening of his speech. ==Kyodo Visiting Chinese President Jiang Zemin travels to Sendai in northeastern Japan by Shinkansen bullet train on Nov. 28 after concluding the Tokyo portion of his six-day state visit to Japan. Before heading to the capital of Miyagi Prefecture, Jiang hailed a joint declaration Japan and China issued Nov. 26 in which they agreed to build a cooperative partnership toward the 21st century. ==Kyodo Japanese Foreign Minister Masahiko Komura (R) and Chinese Foreign Minister Tang Jiaxuan make last-ditch efforts in Tokyo on Nov. 24 to iron out differences over a Japanese apology for wartime acts in China ahead of Chinese President Jiang Zemin's state visit to Japan starting Nov. 25. The apology is to be incorporated in a joint statement to be issued after the summit of Jiang and Japanese Prime Minister Keizo Obuchi on Nov. 26. ==Kyodo