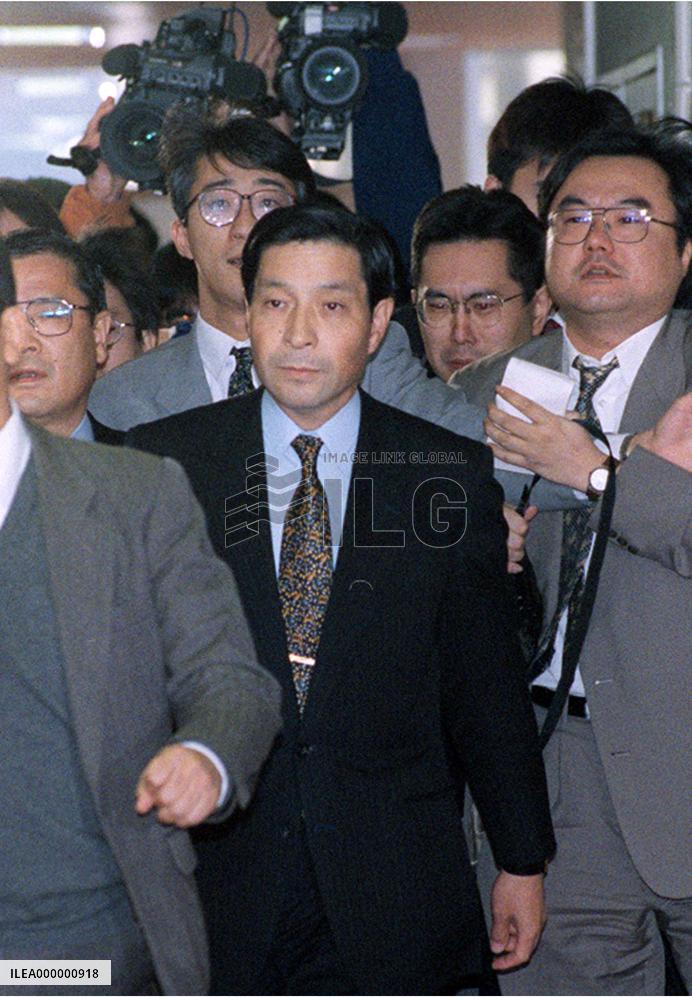 Shigeoki Togo, president of Nippon Credit Bank enters Prime Minister's Office Dec. 12 to receive a notice urging the long-term credit bank to request for temporary nationalization, as the gov't has concluded the bank, laden with huge bad loans, is effectively in a state of collapse. ==Kyodo

STORY: Egypt's CBE offers short-term T-bills for 35 bln EGP DATELINE: Jan. 23, 2023 LENGTH: 00:00:45 LOCATION: Cairo CATEGORY: ECONOMY SHOTLIST: 1. exterior shots of the central bank 2. various of an employee counting Egyptian banknotes 3. various of banks STORYLINE: The Central Bank of Egypt (CBE) offered treasury bills (T-bills) with a combined value of 35 billion EGP through two auctions on Sunday. The first offering is valued at 13.5 billion EGP, carrying a 91-day maturity period, according to official data. The second offering is valued at 21.5 billion EGP, with a maturity period of 273 days. On Thursday, the CBE issued T-bills with an aggregated value of 43.5 billion EGP through two auctions. Egypt is set to receive the second tranche of the 3 billion U.S. dollars loan it secured from the International Monetary Fund (IMF), estimated at around 347 million U.S. dollars, by the end of March, following the completion of the first review of the loan program. The IMF approved in December a 46-month lo

STORY: Egypt's currency further declines against USD DATELINE: Jan. 5, 2023 LENGTH: 00:01:05 LOCATION: Cairo CATEGORY: ECONOMY SHOTLIST: 1. various of national banks in Egypt 2. various of citizens 3. various of banknotes STORYLINE: The Egyptian pound further weakened against the U.S. dollar whose exchange rate jumped Wednesday from about 24.7 to about 26.49 pounds, according to data on the website of the Central Bank of Egypt (CBE). It is the largest single-day decline of the Egyptian pound's value since the CBE allowed it to drop by about 14.5 percent in late October 2022. The country devalued its currency twice in 2022. The move complies with the country's "shift to a durable exchange rate regime" to contain inflation as a key demand of the International Monetary Fund (IMF), which has recently approved a loan of 3 billion dollars to Egypt to support its economic and structural reforms. The IMF's support package also includes measures to be implemented by Egypt to "reduce the state's footprin

STORY: U.S. House passes 1.7 trillion-USD gov't funding package DATELINE: Dec. 24, 2022 LENGTH: 0:00:47 LOCATION: Washington D.C. CATEGORY: ECONOMY SHOTLIST: 1. various of U.S. House of Representatives voting on the bill 2. various of exterior of the U.S. Capitol STORYLINE: The U.S. House of Representatives passed a massive package on Friday to fund the federal government. The omnibus bill -- worth 1.7 trillion U.S. dollars -- cleared the Senate on Thursday and is being sent to the White House. U.S. President Joe Biden said on Friday that he "will sign it into law as soon as it reaches my desk." Biden later signed a short-term funding bill into law to avert a partial government shutdown ahead of the midnight deadline. The one-week continuing resolution has given more time for the spending bill, which runs more than 4,000 pages, to be processed for Biden's signature. The massive spending legislation for fiscal year 2023 includes 772.5 billion dollars for non-defense, domestic programs, and 858 billion

STORY: Palestinian president warns about seriousness of int'l community silence on destruction of two-state solution DATELINE: Dec. 1, 2022 LENGTH: 0:01:29 LOCATION: West Bank CATEGORY: POLITICS SHOTLIST: 1. various of Palestinian President Mahmoud Abbas and Latvian President Egils Levits meeting STORYLINE: Palestinian President Mahmoud Abbas on Wednesday warned about the seriousness of the international silence regarding the destruction of the two-state solution. He made the remarks during a meeting with Latvian President Egils Levits. Abbas urged the international community to link its relations with Israel to the extent of its commitment to those principles, to stop all unilateral actions, and to return the withheld Palestinian funds. He also called on the European Union and its member states not to deal with the Israeli government, which does not recognize the two-state solution based on international legitimacy and signed agreements. For his part, Levits said he felt sorry for the casualties in th

STORY: Nigerian president urges tighter security around borders in Lake Chad Basin DATELINE: Nov. 30, 2022 LENGTH: 00:02:32 LOCATION: Abuja CATEGORY: POLITICS SHOTLIST: 1. various of the arrival of officials at the event 2. various of officials and stakeholders 3. file footage of the Lake Chad Basin region 4. file footage of fishermen on the Lake Chad 5. various of military patrolling the region 6. SOUNDBITE (English): MUHAMMADU BUHARI, Nigerian President STORYLINE: Nigerian President Muhammadu Buhari on Tuesday urged more vigilance and tightening of security around borders, drawing attention to the increased number of arms, ammunition, and other weapons in the Lake Chad Basin. Speaking at the 16th Summit of Heads of State and Government of the Lake Chad Basin Commission (LCBC) in the Nigerian capital Abuja, Buhari, who is also chairman of the summit of heads of state and government, said the threat by terrorists in the region had been relatively brought under control, while the influx of weapons poses

STORY: S.Korean banks' lending rate for households hits 10-year high in September DATELINE: Oct. 29, 2022 LENGTH: 00:01:11 LOCATION: Seoul CATEGORY: ECONOMY SHOTLIST: 1. various of the Bank of Korea 2. various of apartments and banks (courtesy: Yonhap TV) STORYLINE: South Korean banks' lending rate for households hit the highest in over 10 years in September due to policy rate hikes, central bank data showed Friday. The weighted average rate for new bank loans to households was an annualized rate of 5.15 percent in September, up 0.39 percentage points from the previous month, according to the Bank of Korea (BOK). It marked the highest in more than 10 years since July 2012 amid the higher policy rates. The BOK began to tighten its monetary policy stance in August last year, raising the key rate in eight steps from a record low of 0.5 percent to 3.0 percent. The rate for mortgage loans to households rose 0.44 percentage points from August to 4.79 percent in September, while the credit loans rate

STORY: Demonstration held in Paris against high inflation, climate crisis DATELINE: Oct. 17, 2022 LENGTH: 00:03:10 LOCATION: Paris CATEGORY: POLITICS/ECONOMY SHOTLIST: 1. various of street view in Paris 2. various of the demonstration 3. SOUNDBITE 1 (French): JEAN PAUL, Civil servant 4. SOUNDBITE 2 (French): SIMON, Manager of a private company 6. SOUNDBITE 3 (French): JACKIE, Retiree STORYLINE: Tens of thousands of people took to the street in Paris on Sunday to protest against rising inflation and the government's inaction on climate change. The demonstration was organized by La Nupes, a coalition of left-wing French political parties. SOUNDBITE 1 (French): JEAN PAUL, Civil servant "Because I find the distribution of funds to be terrible, in my opinion, it is the European Central Bank that is biased in favor of the president and the government of the republic. They are under the control of the central bank. I take part in demonstrations because I think it is shameful that the rich are too rich and the p

STORY: Kenyan president calls for measures to curb high inflation DATELINE: Sept. 29, 2022 LENGTH: 0:02:07 LOCATION: Nairobi CATEGORY: ECONOMICS SHOTLIST: 1. various of street shots in Nairobi 2. various of Kenya president at press conference 3. various of Telcos and banks executives 4. SOUNDBITE 1 (English) WILLIAM RUTO, Kenya's President 5. various of street shots 6. SOUNDBITE 2 (English) PATRICK NJOROGE, Central bank governor, Kenya 7. various of street shots STORYLINE: Kenya's President William Ruto on Wednesday asked financial institutions to come up with a credit model that will allow small businesses to access affordable loans to cushion them from the harsh effects of high inflation. During a meeting with financial institutions, Ruto said lowering the cost of credit is part of multiple interventions to lower the cost of living. SOUNDBITE 1(English): WILLIAM RUTO, Kenya's President "I'm very confident that if we give shiku (common Kenyan) and her team and many of them in Kenya the opportunity to bo