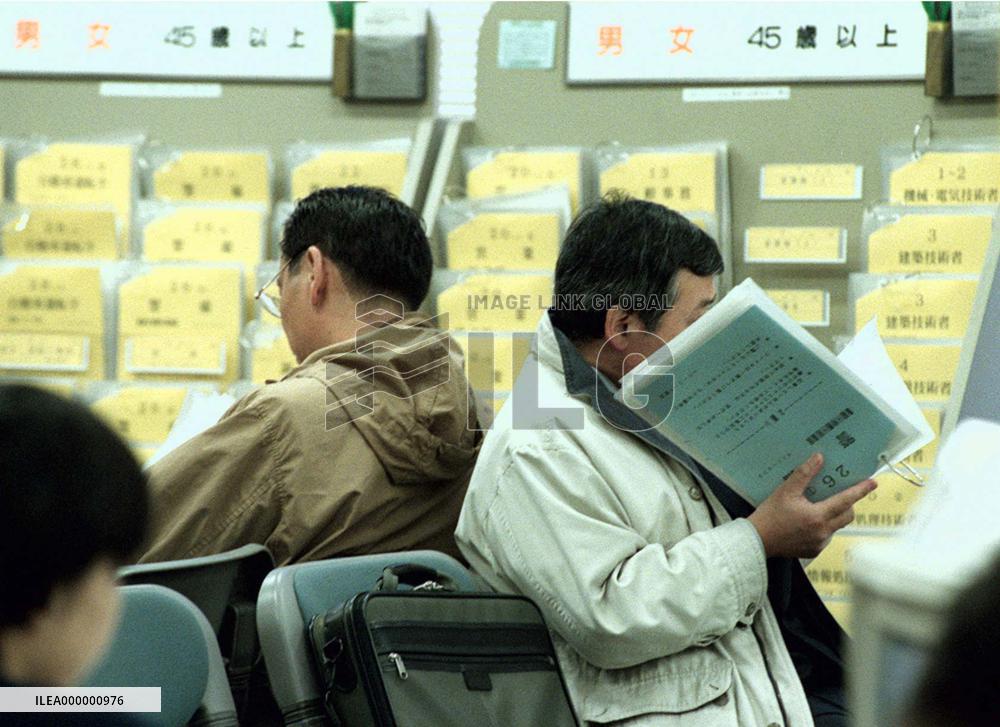 Job seekers read employment information at a placement office in Tokyo's Shinjuku on Dec. 25. The Japanese government announced on the day that the country's unemployment rate in November hit a new record high of 4.4 percent.

STORY: U.S. aviation agency working to restore system, domestic departures affected DATELINE: Jan. 12, 2022 LENGTH: 0:01:27 LOCATION: Washington D.C. CATEGORY: ECONOMY SHOTLIST: 1. STANDUP (English): XIA LIN, Xinhua correspondent STORYLINE: STANDUP (English): XIA LIN, Xinhua correspondent "The U.S. Federal Aviation Administration (FAA) said on Jan. 11, 2023, it is lifting the ground stop as normal air traffic operations are resuming gradually across the country following a system outage. The FAA regulates all aspects of civil aviation in the United States. It continues to look into the cause of the initial problem. The FAA previously ordered airlines to pause all domestic departures until 9 o'clock in the morning East Time to allow the agency to validate the integrity of flight and safety information. The U.S. government agency announced earlier in the day that it was 'working to fully restore the Notice to Air Missions system following an outage.' White House tweeted that U.S. President Joe Biden has been

STORY: Egypt's annual inflation up to 21.9 pct in Dec. 2022 DATELINE: Jan. 11, 2023 LENGTH: 00:01:39 LOCATION: Cairo CATEGORY: ECONOMY SHOTLIST: 1. various of the Central Agency for Public Mobilization and Statistics (CAPMAS) 2. various of the Nile River in Cairo 3. various of a supermarket 4. various of markets STORYLINE: Egypt's annual headline inflation rose to 21.9 percent in December 2022, up from 6.5 percent in December 2021, the country's official statistics agency reported on Tuesday. The Central Agency for Public Mobilisation and Statistics (CAPMAS) said in a statement that the monthly inflation rose by 2.1 percent, hitting 19.2 percent in November 2022. "The increase in prices of basic commodities was behind the rise in the monthly inflation rate," added the agency. It said the prices of food rose by 4 percent annually in the last month of 2022, with outstanding increases in sub-categories such as fruits, dairy products and grains. The Egyptian pound on Tuesday recorded 27.6 against the U.S.

Traffic accidents cause losses of 5.6% of Tunisia's GDP

STORY: Traffic accidents cause losses of 5.6% of Tunisia's GDP DATELINE: Jan. 7, 2023 LENGTH: 00:01:08 LOCATION: Tunis CATEGORY: ECONOMY/SOCIETY SHOTLIST: 1. various of vehicles on the roads in Tunis STORYLINE: The Tunisian Interior Ministry stated on Friday that the losses caused by traffic accidents in the country averaged about 5.6 percent of the gross domestic product in the last few years. A report issued by the ministry on Friday said that traffic safety has become the focus of Tunisians' attention, as traffic accidents have caused huge losses of life and property to the country. According to the report, as of Dec. 23, 2022, the ministry registered a total of 5,353 traffic accidents throughout the year, an increase of 7 percent over 2021. It also registered a total of 1,014 people killed and 5,353 injured in traffic accidents. The ministry stressed that the government will work together with various non-governmental organizations to reduce the occurrence of road accidents. Xinhua News Agency corr

STORY: Türkiye raises salaries of civil servants, pensions by 25 pct DATELINE: Jan. 4, 2023 LENGTH: 00:00:59 LOCATION: Ankara CATEGORY: ECONOMY SHOTLIST: 1.various of people on the street 2.various of people in the market 3.various of people withdrawing money STORYLINE: Turkish President Recep Tayyip Erdogan announced Tuesday that the government will introduce a 25-percent rise in the salaries of civil servants and pensions to ease the burden of rising living costs. The wage and pension increase was in line with the year-end inflation rate, said Erdogan, emphasizing that the inflation will continue to fall in 2023. Inflation in Türkiye hit nearly 85.5 percent, a 24-year high, in October after rising for 17 months, before dropping slightly in November to 84.39 percent. The Turkish government has recently hiked the minimum wage and eliminated a retirement age requirement that would allow more than 2 million Turkish workers to retire immediately. The moves came as Erdogan prepares to run for presidential

STORY: Spain's unemployment rate falls in 2022 despite difficult year DATELINE: Jan. 4, 2023 LENGTH: 00:02:09 LOCATION: Madrid CATEGORY: ECONOMY SHOTLIST: 1. various of different kind of jobs in Spain STORYLINE: Spain ended 2022 with 2,837,653 people registered as unemployed, the least since 2007, according to data published by the Ministry of Labor and Social Economy on Wednesday. The Ministry confirmed that the number of people registered as out of work fell by 43,727 during December, leading to a total fall of 268,252 over the year. Despite the ongoing Russia-Ukraine conflict and rising energy prices, 2022 was also a good year for job creation, with 471,360 new jobs created. Spain ended the year with a record of 20,296,217 people affiliated to its social security system. "The latest data of affiliation to the social security system shows that the year that just ended has been very positive for employment, despite the complicated international situation," commented Jose Luis Escriva, the Minister for

STORY: Public transport sector in Tunis strikes for better payment DATELINE: Jan. 3, 2023 LENGTH: 00:00:56 LOCATION: Tunis CATEGORY: ECONOMY SHOTLIST: 1. various of closed public transport facilities in Tunis STORYLINE: The Tunisian public transport employees on Monday held a strike for payment improvement in response to current rising living expenditure. The public transport in Tunis, including buses and light rail, stopped working and the traffic in the city was paralyzed. According to a spokesman, the Tunisian government will significantly reduce food and energy subsidies in 2023 and the prices of various daily necessities will rise sharply, so they urge the government to increase the employees' payments. For the same reason, Tunisia's aviation and shipping sectors are planning to strike in late January. The country's ministry of economy predicted in December that the inflation rate will reach around 10.8 percent in 2023. Xinhua News Agency correspondents reporting from Tunis. (XHTV) (221229) -- BEIJING, Dec. 29, 2022 (Xinhua) -- The State Council Information Office holds a briefing on private pension schemes in Beijing, capital of China, April 25, 2022. Top 10 China news stories of 2022 7. China improves people's livelihood, brings benefits to every household Faced with epidemic resurgences and economic pressure this year, China put ensuring and improving people's livelihood in a more prominent position, and took a raft of concrete measures to achieve this principle. On Nov. 25, China launched private pension schemes in 36 cities and regions across the country. China also increased basic pension for retirees, the subsidies for people in difficulty, as well as subsidies for basic public health services. The country maintained overall stability in employment and prices. It also advanced rural revitalization after attaining victory in the battle against poverty, creating jobs for over 32 million people who had been lifted out of poverty. (Photo by Liu Jian/Xinhua)

STORY: Mongolia registers record high number of livestock DATELINE: Dec. 28, 2022 LENGTH: 00:01:10 LOCATION: Ulan Bator CATEGORY: OTHERS SHOTLIST: 1. various of livestock animals in Mongolia STORYLINE: Mongolia logged 71.1 million head of livestock, a record high since the nomadic country began a livestock animal census in 1918, said a senior expert of the National Statistics Office (NSO) Wednesday. A preliminary result of the annual livestock census by the NSO showed that the number of livestock in 2022 increased by 3.8 million, or 5.6 percent, from the previous year, Erdene-Ochir Myagmarkhand told a press conference. Sheep accounted for 46.0 percent of all livestock, goats 38.8 percent, cattle 7.7 percent, horses 6.8 percent and camels 0.7 percent, said Myagmarkhand. Mongolia is one of the world's last surviving nomadic countries. The promotion of livestock husbandry is seen as the most viable solution to diversify the landlocked country's mining-dependent economy. Xinhua News Agency corresp

STORY: Egypt raises interest rate to contain high inflation DATELINE: Dec. 23, 2022 LENGTH: 0:00:57 LOCATION: Cairo CATEGORY: ECONOMY SHOTLIST: 1 various of the Central Bank of Egypt 2 various of an accountant counting banknotes STORYLINE: Egypt announced on Thursday to raise the interest rate by 300 basis points to contain soaring inflation. In Thursday's meeting, the Monetary Policy Committee (MPC) in Egypt decided to raise the central bank's deposit rate to 16.25 percent and lending rate to 17.25 percent. Egypt's annual urban consumer inflation rate "continued to accelerate," rising from 16.2 percent in October to 18.7 percent in November, the highest rate since December 2017 when it reached 21.9 percent. The Egyptian economy has been greatly affected by the COVID-19 pandemic and Russia-Ukraine conflict which led to increased costs of food and oil imports, given that the most populous Arab country is one of the world's largest importers of wheat, most of which came from Russia and Ukraine. Th

Faced with rising prices, Tunisians save spending on home decoration for food

STORY: Faced with rising prices, Tunisians save spending on home decoration for food DATELINE: Dec. 20, 2022 LENGTH: 00:01:05 LOCATION: Tunis CATEGORY: ECONOMY SHOTLIST: 1. various of Dar Deco Exhibition in Tunis STORYLINE: The Dar Deco Exhibition held in every December in Tunis is the largest home decoration and design exhibition in Tunisia. It had attracted more than 100,000 visitors from the capital city and surrounding areas each time. Due to high inflation and rising prices of basic daily necessities in this country, there are not many visitors attending the exhibition this year. The Tunisian Statistics Office announced that the inflation rate in November 2022 was 9.8 percent, reaching a new high in 10 years. The price of food, including meat, eggs, vegetables, fruits, etc., has increased by more than 15 percent. Several exhibitors said many Tunisians canceled spending on home decoration due to the stress of life. Facing economic downturn, the Tunisian government could not afford subsidies for gaso