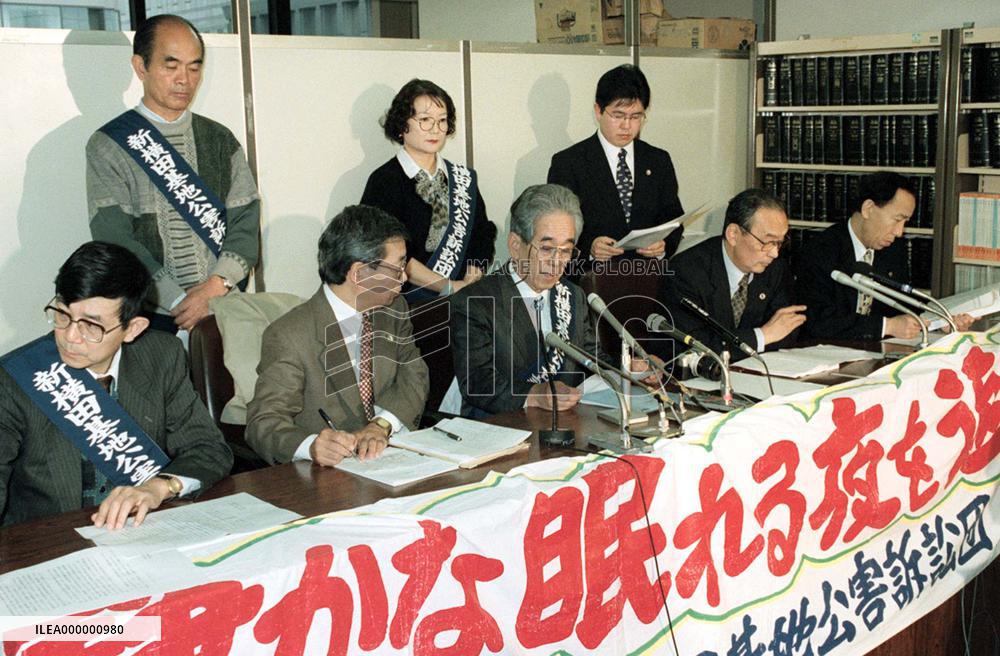 Representatives of residents living near a U.S. Air Force base in Tokyo's western suburbs hold a press conference Dec. 25, after the Tokyo High Court rejected their appeal of a noise pollution suit against the U.S. government. The court upheld the lower court's March 1997 decision.

STORY: Iran says U.S. "contradictory behavior" main obstacle to nuclear agreement DATELINE: Oct. 18, 2022 LENGTH: 00:01:59 LOCATION: Tehran CATEGORY: POLITICS SHOTLIST: 1. various of a press conference of the Iranian foreign ministry STORYLINE: Iranian Foreign Ministry spokesman Nasser Kanaani said Monday that the contradiction in the U.S. officials' words and actions is the main obstacle to an agreement on the revival of the 2015 nuclear deal, according to the official news agency IRNA. Speaking at a weekly press conference, Kanaani added that U.S. officials sent messages to voice their viewpoints about the nuclear talks on the one hand, while showing contradictory behaviors in practice on the other. He noted that Washington's approach failed to contribute to or supplement the nuclear talks. Kanaani stressed that "grounds exist for reviving the nuclear deal and all sides' return to it," but the issue currently hinges on the U.S. government's political decision. "We can return to the deal" STORY: Egypt allocates 58.3 mln USD for industrial complexes DATELINE: July 13, 2022 LENGTH: 00:00:46 LOCATION: Cairo CATEGORY: POLITICS/ECONOMY SHOTLIST: 1. various of the Finance Ministry in Cairo 2. various of Egypt's Finance Minister Mohamed Maait in a press conference STORYLINE: Egypt's Finance Minister Mohamed Maait said on Tuesday the government has assigned 1.1 billion Egyptian pounds (about 58.3 million U.S. dollars) in the new budget to resume establishing utilities for 13 industrial complexes in several governorates to provide the small and medium-sized enterprises (SMEs) with a stimulating infrastructure. Maait said the move would also help create more job opportunities. Maait also announced that the country's House of Representatives approved a new law to reduce up to 65 percent of fines and delay interest charged on taxes, customs, and real estate taxes not paid by the original due date. However, this reduction will be provided on the condition that the original taxes are paid before the en

STORY: Tunisia's judges start week-long strike against president's dismissal of 57 colleagues DATELINE: June 7, 2022 LENGTH: 00:00:56 LOCATION: Tunis CATEGORY: POLITICS SHOTLIST: 1. various of the Tunisian national flag 2. various of the Justice Ministry 3. various of a closed court STORYLINE: The Tunisian Magistrates' Association (AMT) started Monday a one-week strike in response to the president's latest decision to sack 57 judges without the possibility of appeal, the country's private radio station Mosaique FM reported. During the strike, only burial permits and extremely urgent terrorism cases will continue to be processed, the report added. The strike was announced during an extraordinary session organized by the AMT in the capital of Tunis, and a thousand judges attended the meeting. On June 1, Tunisian President Kais Saied issued a presidential decree to dismiss 57 judges over corruption and covering up terrorist cases. On Feb. 6, Saied decided to dissolve the country's Superior Council of the

Polish not to get EU funds soon despite EC's approval

STORY: Polish not to get EU funds soon despite EC's approval DATELINE: June 4, 2022 LENGTH: 00:02:32 LOCATION: Warsaw CATEGORY: POLITICS SHOTLIST: 1. various of the meeting and the press conference 2. SOUNDBITE (English): URSULA VON DER LEYEN, President of the European Commission STORYLINE: Polish President Andrzej Duda on Thursday welcomed the European Commission's (EC) approval of Poland's National Recovery Plan (KPO), but his country still has to wait for the fund. Speaking at a press conference with visiting EC President Ursula von der Leyen and Polish Prime Minister Mateusz Morawiecki near Warsaw, Duda said the approvement "has a breakthrough significance for Poland to be able to obtain EU funds in the future," according to Polish Press Agency. A dispute over the rule of law had led to the EC delaying its approval of the KPO, prompting the Polish government to adhere to a European Court demand that it liquidate a judicial disciplinary body. Duda expressed satisfaction that his amendments to the S (220516) -- STOCKHOLM, May 16, 2022 (Xinhua) -- Swedish Prime Minister Magdalena Andersson speaks at a press conference in Stockholm, Sweden, on May 16, 2022. Magdalena Andersson on Monday announced the official decision to start the process of the country's application to become a member of the North Atlantic Treaty Organization (NATO). (Ninni Andersson/Government Offices of Sweden/Handout via Xinhua)

Sweden to apply to join NATO

STORY: Sweden to apply to join NATO DATELINE: May 17, 2022 LENGTH: 0:00:45 LOCATION: Stockholm CATEGORY: POLITICS/MILITARY SHOTLIST: 1 various of Swedish Parliament 2 various of the press conference (courtesy of Swedish government) 3 various of Swedish Parliament 4 various of streets in Stockholm STORYLINE: Swedish Prime Minister Magdalena Andersson on Monday announced the official decision to start the process of the country's application to become a member of the North Atlantic Treaty Organization (NATO). "It is clear that there is a broad majority in Sweden's parliament for Sweden to join NATO," Andersson said during a press conference. According to Andersson, Sweden's NATO ambassador in Brussels will submit the country's NATO application within the next few days. The application will be submitted together with Finland. The government has also decided on a bill that will make it possible for Sweden to receive military support from all European Union (EU) and NATO countries. On Sunday, Sweden's rulin (220516) -- STOCKHOLM, May 16, 2022 (Xinhua) -- Swedish Prime Minister Magdalena Andersson (R) holds a press conference together with the Moderate Party's leader Ulf Kristersson in Stockholm, Sweden, on May 16, 2022. Magdalena Andersson on Monday announced the official decision to start the process of the country's application to become a member of the North Atlantic Treaty Organization (NATO). (Ninni Andersson/Government Offices of Sweden/Handout via Xinhua)