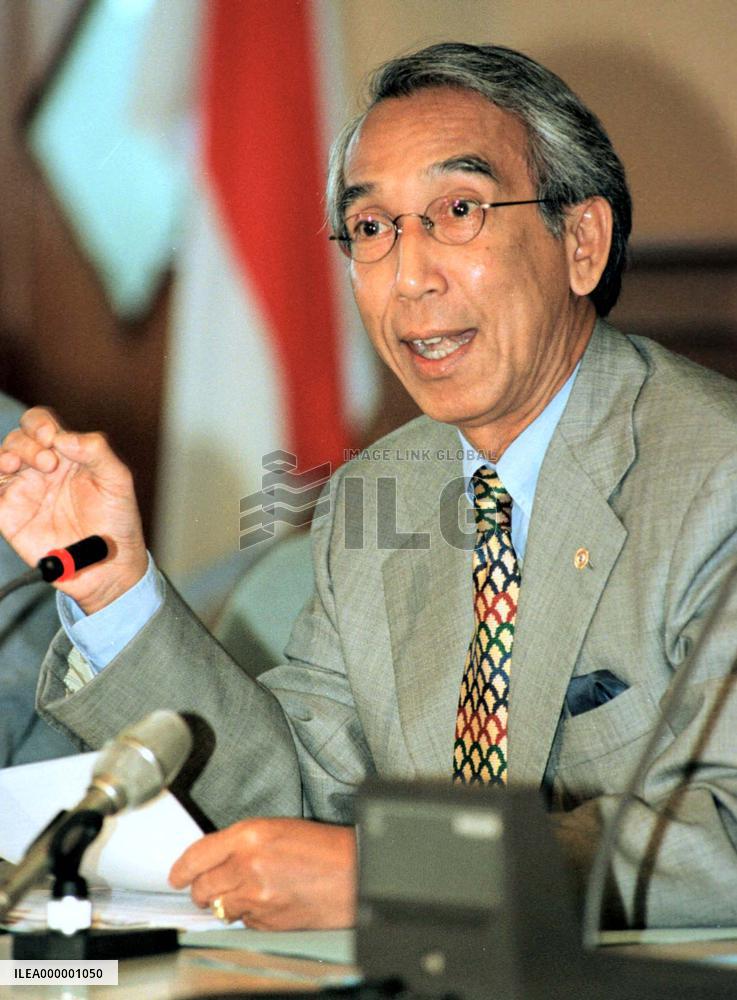 Trade and Industry Minister Rahardi Ramelan, who is also chairman the National Logistics Agency (BULOG), denies Jan. 11 Japanese media reports that rice aid from Japan is being stockpiled in government warehouses or distributed to government officials, not to the needy. He said at a press meeting, ''We've never distributed (the rice) free of charge to anybody.'' TOKYO, Japan - Economy, Trade and Industry Minister Shoichi Nakagawa speaks at a press conference on Aug. 29. He announced a 20 percent pay cut for two months for his vice minister Hideji Sugiyama over a series of public fund misuse scandals involving officials at the ministry. (Kyodo) TOKYO, Japan - Jin Murai, the new chairman of the National Public Safety Commission which controls the nation's police force, speaks at a news conference April 26. Murai is a former bureaucrat at the Ministry of International Trade and Industry who also worked at the Defense Agency. TOKYO, Japan - Fukushiro Nukaga, 57, state minister in charge of economic and fiscal policy, comes out of the prime minister's official residence Jan. 23 after tendering his resignation to Prime Minister Yoshiro Mori in the wake of allegations regarding his receipt of 15 million yen from mutual aid foundation KSD in 1999 and 2000. Mori accepted Nukaga's resignation and appointed Taro Aso, a former Economic Planning Agency chief, as his replacement. TOKYO, Japan - International Trade and Industry Minister Takashi Fukaya (L) and Nobel Physics Prize winner Reona (Leo) Esaki hold a board inscribed with the name and logo of a just-established national forum aiming to nurture Japanese entrepreneurs, at a Tokyo meeting of its senior officials March 17. Local businesspeople and newspapers will be invited as regional organizers and sponsors of the forum's symposiums so their ideas and experiences can be shared. TOKYO, Japan - Officials from various government agencies sit for a hurriedly called meeting Jan. 26 after pranks by hackers were discovered on the Web site of the Science and Technology Agency for the second time in three days.