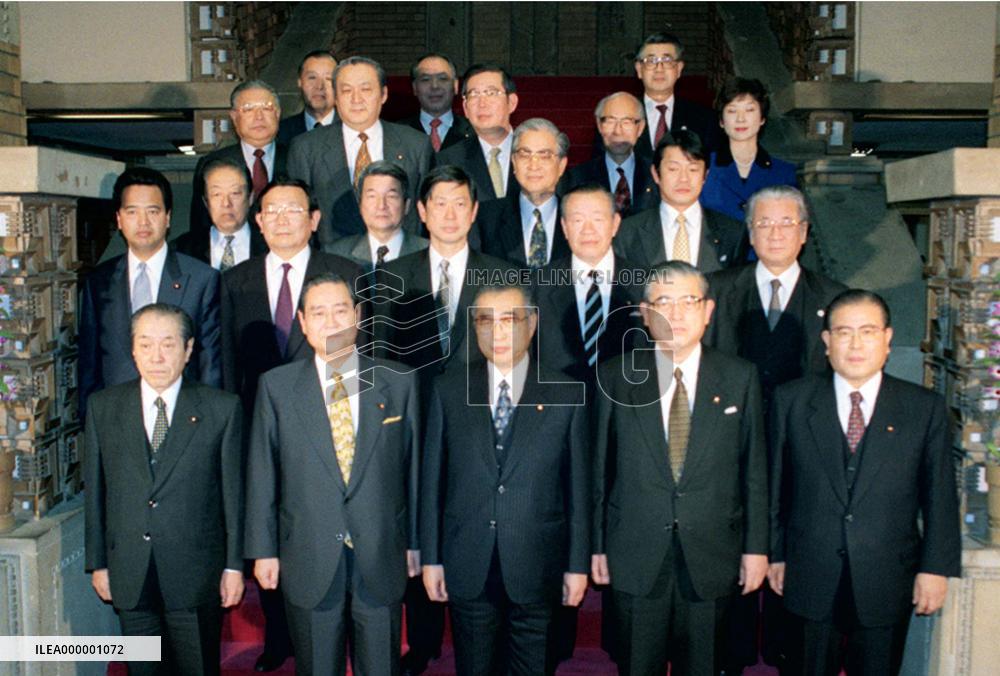 Prime Minister Keizo Obuchi (center, front row) and his cabinet pose for commemorative photograph Jan. 14 at the prime minister's official residence after the first cabinet meeting held following the inauguration of a coalition government between the Liberal Democratic Party and the Liberal Party. Takeshi Noda, the newly appointed home affairs minister (2nd from left, front row), is the only Liberal minister in the slimmed down 18-member cabinet. ==Kyodo

STORY: Chris Hipkins confirmed New Zealand's new PM, to focus on domestic issues DATELINE: Jan. 22, 2023 LENGTH: 00:03:00 LOCATION: Wellington CATEGORY: POLITICS SHOTLIST: 1. various of street views of New Zealand Parliament Buildings 2. various of the press conference after the Caucus meeting 3. various of street views of Wellington STORYLINE: The New Zealand Labor Party has confirmed Chris Hipkins as the party's new leader and New Zealand's 41st Prime Minister. Chris Hipkins announced that at a press conference on Sunday. The Labor Party caucus meeting on Sunday voted the Caucus member, Minister for Education, Police and Public Service and Leader of the House Chris Hipkins as the new party leader. Hipkins was the only nominee to replace Jacinda Ardern, who announced her resignation on Thursday. Member of Parliament for Kelston and Cabinet minister Carmel Sepuloni was appointed deputy prime minister. According to the New Zealand political system, the majority party of the Parliament forms the STORY: New Italian PM calls for unity DATELINE: Oct. 24, 2022 LENGTH: 0:01:59 LOCATION: Rome CATEGORY: POLITICS SHOTLIST: 1. various of Palazzo Chigi 2. various of the meeting STORYLINE: New Italian Prime Minister Giorgia Meloni on Sunday called for unity as she symbolically took power in a country that faced what she said were "multiple" challenges. Though Meloni was sworn in on Saturday, outgoing Prime Minister Mario Draghi ceremonially passed power to her Sunday in a televised meeting at Palazzo Chigi, the official seat of Italy's government. Draghi, a former governor of the European Central Bank, had been prime minister since February 2021, though he served in a caretaker role since resigning after his coalition splintered in July. Meloni, the leader of the right-wing Brothers of Italy, was asked to form the new government after her party won 26 percent of votes in the recent polls, ending up as the most voted force. She had run the campaign with her two coalition allies, the center-rig

STORY: Italy selects leadership for two houses of parliament DATELINE: Oct. 15, 2022 LENGTH: 00:08:01 LOCATION: Rome CATEGORY: POLITICS SHOTLIST: 1. various of La Russa speaking 2. various of La Russa meeting Sergio Mattarella 4. various of new deputies 5. various of voting 6. Lorenzo Fontana entering the hall 7. Fontana elected STORYLINE: Lorenzo Fontana, a two-time minister from a party likely to be a junior member of the next Italian government coalition, was selected on Friday as speaker of the lower house of Italy's parliament. Fontana's selection as speaker of the Chamber of Deputies followed the selection of Ignazio La Russa Thursday as president of the Senate, the upper house of parliament. Fontana, 42-year-old, received 222 votes, 25 more than he needed to be confirmed in the fourth round of voting. Fontana is a former European affairs minister and a former minister of family and disabilities. He is a member of the League, which won 8.8 percent of the vote for the Chamber of Deputies in Italy's