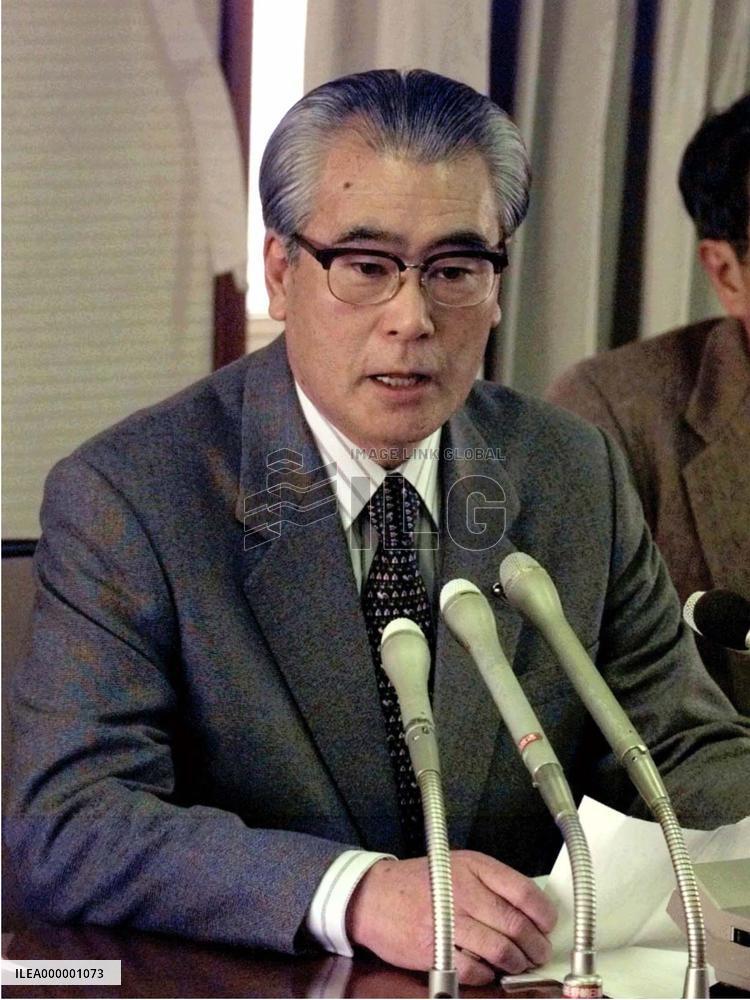 Nagano Mayor Tasuku Tsukada talks to reporters at his office in Nagano on Jan. 14. Tsukada, who had repeatedly denied his city had employed an agency in its campaign to host the 1998 Winter Olympics, admitted that Nagano paid some 40 million yen to a Swiss-based agency. But he rejected allegations that his bid committee sought to have the agency lobby IOC members to gather votes in an illegal manner. ==Kyodo SHIZUOKA, Japan - Takeshi Masuno (back R), an office worker from Aichi Prefecture, and members of his family pose with Shizuoka Mayor Zenkichi Kojima (L) as the 500,000th visitor to the Shizuoka Hobby Fair, a plastic model exhibition event featuring an 18-meter-tall ''life-size'' Gundam in Shizuoka City on Aug. 24, 2010. (Kyodo) MIYAZAKI, Japan - Miyazaki Gov. Hideo Higashikokubaru speaks to reporters about his intention not to run in the next House of Representatives election at the prefectural office in the city of Miyazaki on Oct. 6. Higashikokubaru's possible bid for a seat in the lower house had drawn national interest. (Kyodo) TOKYO, Japan - Jun Hoshikawa, executive director of Greenpeace Japan, speaks to reporters in front of Greenpeace's office in Tokyo on June 20 after police arrested two Greenpeace members on suspicion of stealing whale meat. The group presented the meat to prosecutors as evidence in its allegations of a whale meat smuggling operation involving a government-sponsored whaling program. (Kyodo) KASHIHARA, Japan - Tunisian striker Adel Selimi votes in the country's national referendum May 24 on revising the Tunisian Constitution in Kashihara, Nara Prefecture. Some 40 members of the team cast their ballots in a polling booth specially set up in the Kashihara city office. NAHA, Japan - Mitsuo Gima (L), who won Sunday's Urasoe mayoral election, raises his hands with his wife Asako in a celebration at his campaign office Feb. 11. Gima, 57, a former Okinawa prefectural assembly chairman, supports a plan to relocate a U.S. naval port to Urasoe from nearby Okinawa prefectural capital Naha. He won 19,739 votes, beating incumbent Kenichi Miyagi with 18,553. Gima was supported by the Liberal Democratic Party, the New Conservative Party and the New Komeito party. OSAKA, Japan - Staff look busy Jan. 11 as Osaka's bid to host the 2008 Olympic Games enters the final six months of its campaign. The Osaka bid committee, hoping it will emerge victorious on July 13 when the International Olympic Committee (IOC) votes for the host city of the 2008 Olympics, submits its ''candidature file'' to the IOC on Jan. 16. YOKOHAMA, Japan - Yokohama Mayor Hidenobu Takahide meets the press at the municipal government building in Yokohama on Dec. 14 after the city assembly approved a revised ordinance allowing the city to impose Japan's first local tax on horse-race betting. The city, the birthplace of modern horse-racing in Japan, estimates the 5% levy on bets placed at the city's off-track betting booths will bring in 1 bil. yen. TOKUSHIMA, Japan - Tokushima Mayor Masakatsu Koike (R sitting) meets Tokushima Prefecture Gov. Toshio Endo (L) at the prefectural office on Jan. 24 to report that in a Jan. 23 referendum an overwhelming majority of residents in the city of Tokushima voted no to a project to construct a weir on the Yoshino River. In the direct ballot, more than 90 percent of voters opposed the controversial 100 billion yen project being pushed by the Construction Ministry. OSAKA, Japan - Osaka Gov. Knock Yokoyama speaks to reporters at his office Dec. 13 shortly after he was ordered by the Osaka District Court to pay 11 million yen in compensation to a 21-year-old university student for sexually harassing her during his reelection campaign in April and later slandering her by filing a counter lawsuit. In the press conference, Yokoyama, 67, said, ''I have no plans to resign. Since I stuck to my decision to place priority on official duties, such a ruling was inevitable.'' Members of the Turin Olympic bid committee uncork the champagne to celebrate their victory June 19 when the Italian city was awarded the right to host the 2006 Olympic Winter Games by the International Olympic Committee in Seoul.