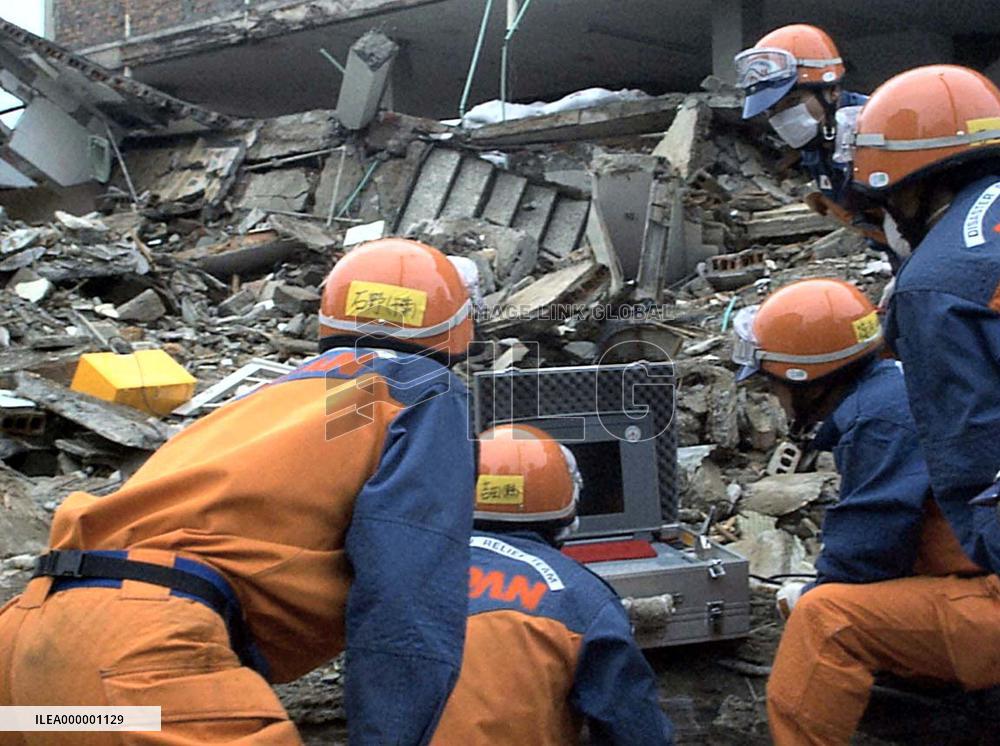 Using high-tech equipment, members of a Japanese emergency relief team to Colombia search for missing people at an apartment site in Armenia on Jan. 28 in the aftermath of a powerful earthquake on Jan 25. The team, headed by a Foreign Ministry official, consists of firefighters, policemen and members of the Japan International Cooperation Agency, a foreign assistance body of the Foreign Ministry. QINGCHUAN, China - The first group of Japan's emergency disaster relief team begins rescue and recovery operations May 16 at a collapsed apartment in Qingchuan County in the western Chinese province of Sichuan, hit by the devastating May 12 earthquake. (Kyodo) CHENGDU, China - Japan's emergency disaster relief team arrives in Chengdu, the capital of Sichuan Province, an area hard hit by a devastating earthquake, during the predawn hours on May 16. The Chinese government said more than 50,000 people are feared dead in the wake of the massive earthquake in the country's southwest region on May 12. (Kyodo) NARITA, Japan - Japan's rescue team of 20 firefighters, the first group of Japan's emergency relief mission, leaves Narita airport, east of Tokyo, for Turkey, which was hit by a killer earthquake, on Aug. 17. The 20 firefighters are part of some 20 medical and 35 rescue personnel to western Turkey. The death toll rises to at least 800, according to Turkish state TV station. Japan's a 35-member emergency relief team leaves Jan. 26 Narita airport to Colombia to help relief activities in the aftermath of a powerful earthquake that is believed to have killed more than 400 people. The team will arrive in Santafe de Bogota Jan. 27 morning local time. ==Kyodo