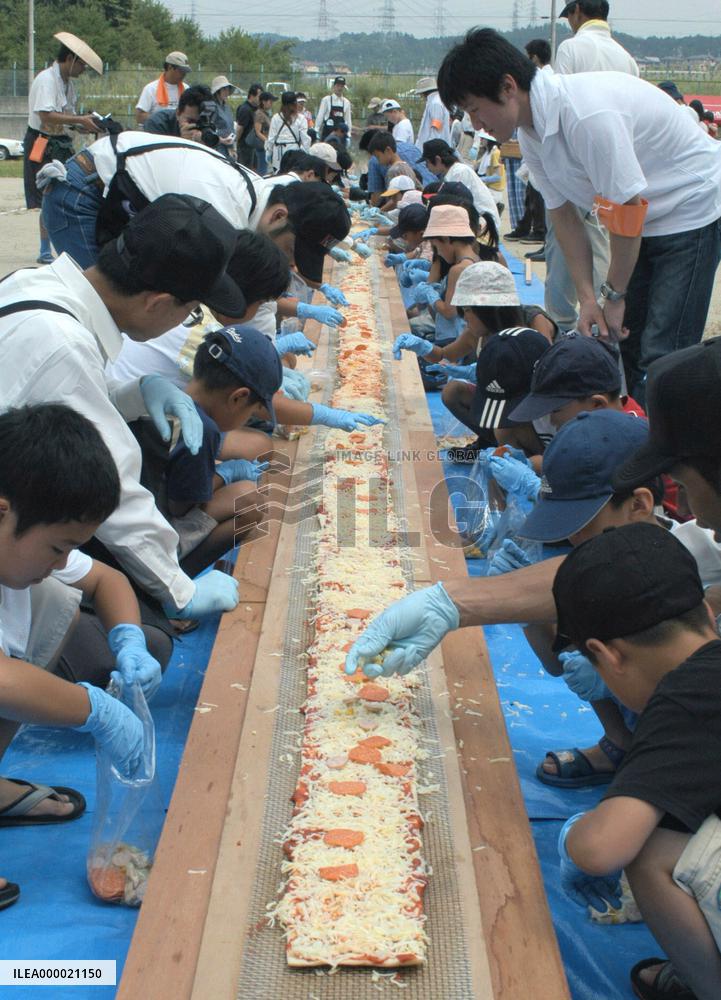 KYOTO, Japan - Assisted by their parents and teachers, schoolchildren in the town of Uji-Tawara, Kyoto Prefecture, place topping Sept. 6 on what they hope to be the world's longest pizza. Organizers of the event said they will seek to have the 25-meter-long pizza registered on the Guinness World Records book. (Kyodo) 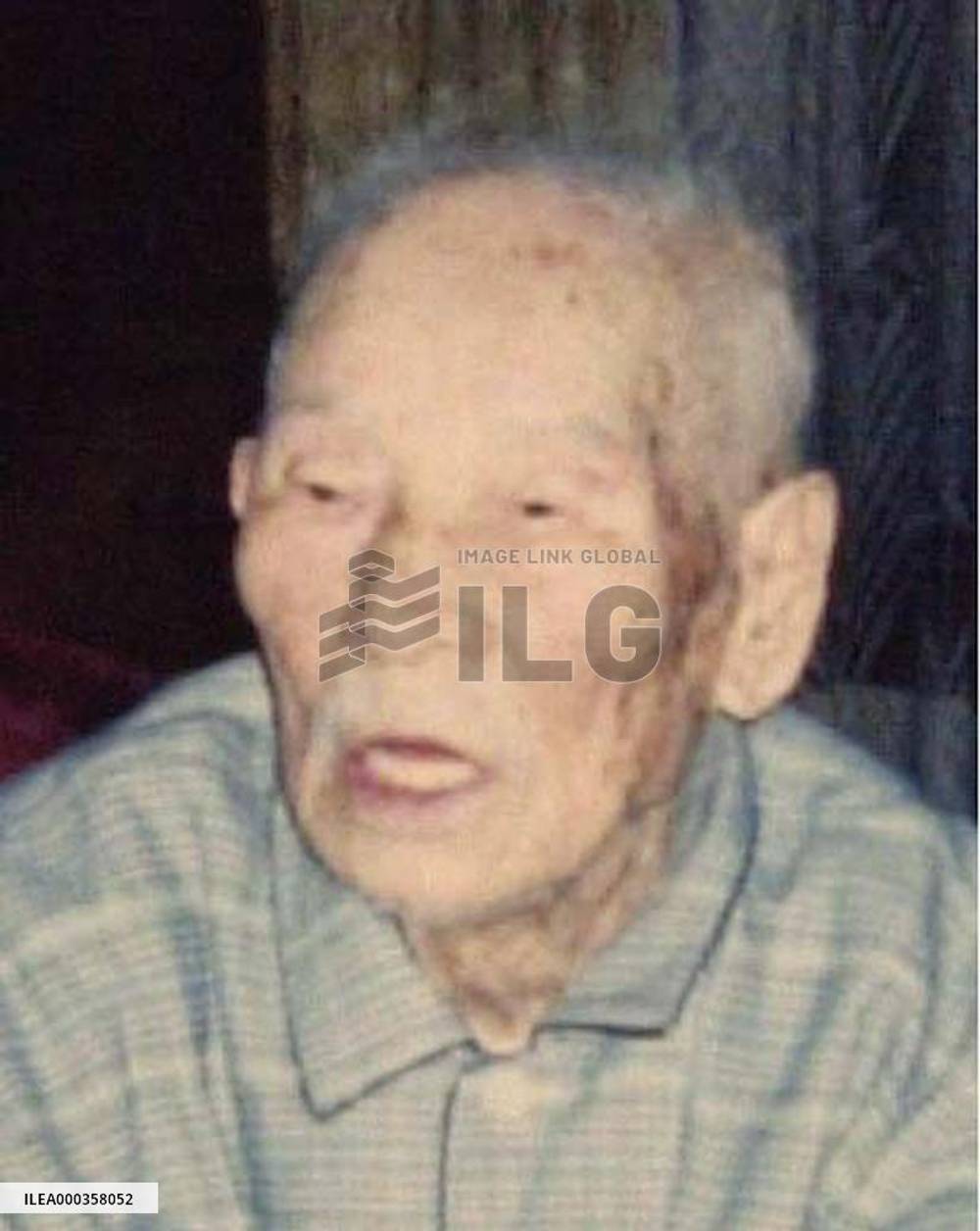 FUKUOKA, Japan - Yukichi Chuganji (file photo), a 112-year-old Japanese man who lives in Fukuoka Prefecture, southwestern Japan, is the world's oldest man following the death in early January of Antonio Todde, an Italian who held the title. Via the municipal government office, the Guinness Book of Records notified Chuganji in late January that he has been recognized as the oldest man alive, said his oldest daughter, Kyoko, 72, who lives with him. Photo taken June 3, 2019, shows Hakata Torimon, a popular "manju" steamed-bun cake from Japan's southwestern prefecture of Fukuoka. The confection has been recognized by Guinness World Records for having the most sales in a calendar year in a new category dedicated to bean paste-filled confectionery, with total sales of 7.59 billion yen (around $70 million) in 2018. (Kyodo) ==Kyodo CHIBA, Japan - Gamers give products a spin at the Tokyo Game Show 2009, the world's top gaming event, which kicked off Sept. 24, 2009, for a four-day run at the Makuhari Messe convention center in Chiba Prefecture. (Kyodo) KYOTO, Japan - Doudou Diene of Senegal, special rapporteur of the U.N. Commission on Human Rights on contemporary forms of racism, racial discrimination, xenophobia and related intolerance, inspects the Utoro district in Uji, Kyoto Prefecture, on July 5 where ethnic Koreans living there since World War II are under threat of eviction. (Kyodo) NAHA, Japan - Tatsuya Tokuzawa, owner of this store in Naha, Okinawa, plans to apply to be listed as the world's smallest used-books store in the Guinness Book of World Records. The store ''Tokufukudo,'' is 1.35 square meters in size, 1.8 meters in depth, 75 centimeters in width and 2.75 meters in height. It has about 250 books, including novels and photo collections, in a handmade wooden bookshelf, leaving only a 55 cm width for the isle. (Kyodo) NAGOYA, Japan - The Poke Park dedicated to the Japanese Pokemon cartoon characters opens in Nagoya at one of the sites for the 2005 World Exposition in Aichi Prefecture on March 18. The park, which will run until Sept. 25, sports 12 attractions, including a 50-meter-tall Ferris wheel depicting Monster Balls and a Pikachu-shaped ride. (Kyodo) World Expo pavilions in Aichi handed over to participants

NAGAKUTE, Japan - Photo shows an artist's image of the U.S. Pavilion to be built for the 2005 World Exposition in Aichi Prefecture. Newly completed pavilions for the Aichi Expo were handed over to about 130 participating countries and international organizations at a ceremony on Sept. 14, six months before the event opens in March. (Kyodo) 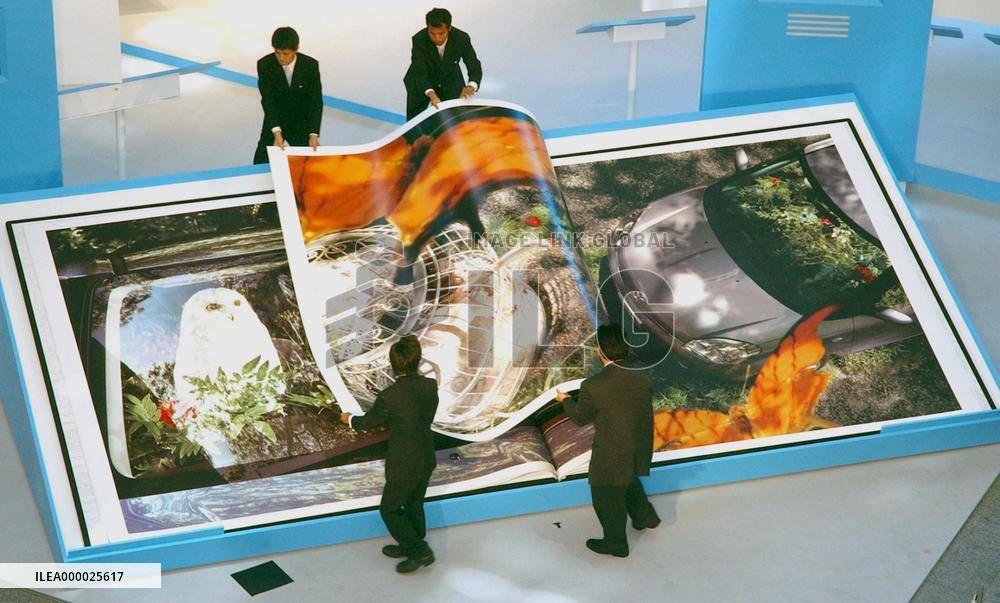 TOKYO, Japan - Four persons try to turn over a page on what is claimed to be the world's largest photo collection just completed by Japanese photographer Rowland Kirishima. The book, whose cover measures 3.07 meters tall and 3.42 meters wide, was unveiled during an event marking the release of a new Mazda car held in Tokyo on July 21. The whole book weighs about 350 kilograms. Organizers of the event said they plan to apply to Guinness World Records for registration as the world's largest photo collection. (Kyodo) KYOTO, Japan - Parents gather at Uji Elementary School in Kyoto Prefecture on Dec. 18 after two 7-year-old boys were slashed at the city-run school by an intruder with a kitchen knife. (Kyodo) MATSUYAMA, Japan - Akio Yonago, 56, who lost his left arm in a fishing accident at age 23, smiles at Honai in Ehime Prefecture on Aug. 2 before leaving on a nonstop solo boat voyage around the world. Yonago is scheduled to return to the town around next May after a 300-day, 47,000-kilometer voyage on his 11-meter vessel. (Kyodo)