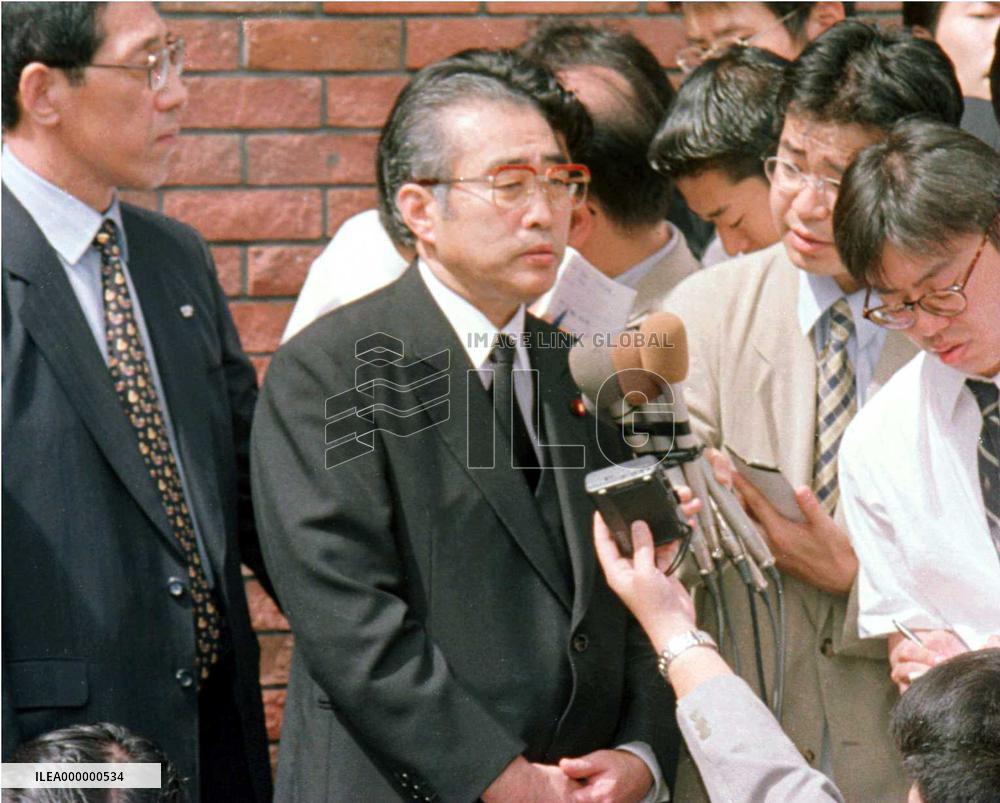 Japanese Foreign Minister Keizo Obuchi expresses sympathy July 27 to the family of Japanese U.N. peacekeeper Yutaka Akino, who was shot dead July 20 in Tajikistan with three other peacekeepers. Obuchi, who visited Akino's home in Sapporo, northern Japan, spoke to reporters and called his death ''a big loss for Japan.''

STORY: Japan's former prime minister Abe dies after being shot at stump speech DATELINE: July 8, 2022 LENGTH: 00:01:49 LOCATION: Tokyo CATEGORY: POLITICS SHOTLIST: STANDUP(English): ZHANG XIAOYU, Xinhua correspondentvarious of people morning the death of former Japanese prime minister Shinzo Abe STORYLINE: STANDUP(English): ZHANG XIAOYU, Xinhua correspondent "Former Japanese prime minister Shinzo Abe was pronounced dead on Friday after being fatally shot while he was delivering a speech in the western prefecture of Nara." Abe, also former leader of the ruling Liberal Democratic Party (LDP), was shot twice during a speech. He was shot from behind by a former worker from the Maritime Self-Defense Force (MSDF). He was later rushed to a hospital, and passed away there. The hospital said the cause of death was believed to be blood loss. The 41-year-old perpetrator was arrested at the scene for attempted murder and was quoted as telling police he intended to kill Abe as he was "dissatisfied" with the former (3)Soga arrives in Tokyo before family reunion in Indonesia

TOKYO, Japan - Repatriated Japanese abductee Hitomi Soga answers questions from reporters about her meeting with Prime Minister Junichiro Koizumi at the prime minister's office in Tokyo on July 7 ahead of traveling to Indonesia to be reunited with her husband and two daughters living in North Korea. (Kyodo) Soga happy over proposed reunion with family in Indonesia TOKYO, Japan - Japanese Prime Minister Yoshiro Mori welcomes a group of schoolchildren from Okinawa Prefecture to his official residence in Tokyo on July 25. The youngsters, from elementary and junior high schools, were playing the role of journalists during their trip to the capital. Since their home prefecture had just finished hosting the Group of Eight summit, the event was their main subject of conversation with the prime minister. TOKYO, Japan - Foreign Minister Yohei Kono says July 6 he may have ''some kind of contact'' with his North Korean counterpart during a July 27 meeting in Singapore of the ASEAN Regional Forum (ARF). But Kono said in an interview with a group of reporters at his ministry that Japan is not yet taking any steps to set a meeting with North Korean Foreign Minister Paek Nam Sun. ''We will consider after his participation becomes official and is confirmed,'' Kono said. TOKYO, Japan - Former Chief Cabinet Secretary Seiroku Kajiyama (in this file photo) died June 6 at a Tokyo hospital. He was 74. Kajiyama had been undergoing medical treatment since being involved in a traffic accident in January. The cause of death was not immediately known. A leading figure in the ruling Liberal Democratic Party, Kajiyama announced through his family on April 25 that he would retire from politics due to health concerns. He also served as home affairs minister, international trade and industry minister and justice minister.

TOKYO, Japan - A hearse carrying the body of former Prime Minister Keizo Obuchi leaves Aoyama Funeral Hall on May 15 after a wake in which about 3,500 people, including former Prime Minister Ryutaro Hashimoto (far left in front row), mourned his death. Obuchi died May 14 aged 62 after six weeks in a stroke-induced coma. TOKYO, Japan - Family members of former Prime Minister Keizo Obuchi and their colleagues pay their respects to the former premier on May 16 at a private funeral in Tokyo's Aoyama Funeral Hall. Obuchi's wife, Chizuko (C), was among the mourners, who offered flowers on the altar one by one. TOKYO, Japan - Former U.S. Ambassador to Japan Mike Mansfield (L) and the late former Japanese Prime Minister Keizo Obuchi are shown in a file photo after a meeting in Washington in May 1999. Mansfield in a statement May 15 expressed condolences on the death of Obuchi, calling it ''a tragedy for all.'' Obuchi died May 14 aged 62.