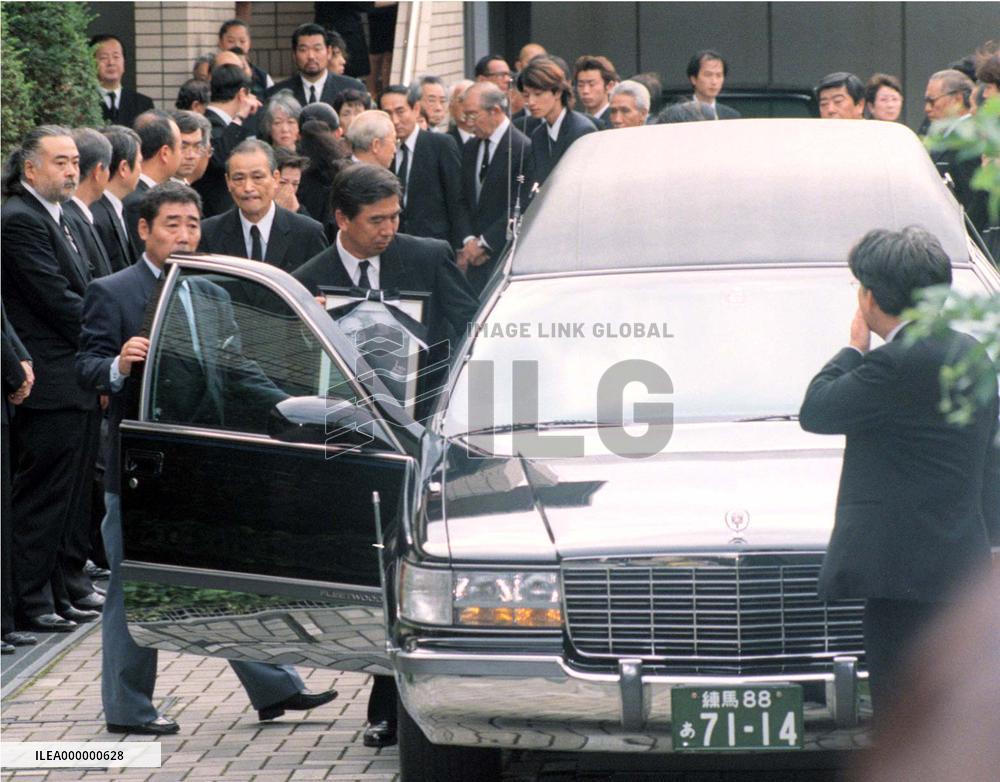 The family of the late film director Akira Kurosawa holds a private funeral at his home in Tokyo's Setagaya Ward on Sept. 8. The photo shows Kurosawa's son, Hisao, about to get into a hearse, carrying his father's photo. The director died of a stroke on Sept. 6 at the age of 88. TOKYO, Japan - This file photo taken in September 1998 shows production designer and art director Yoshiro Muraki who died of heart failure on Oct. 26, 2009, aged 85. Muraki was known for his work in most of the films directed by Akira Kurosawa (1910-1998). (Kyodo) TOKYO, Japan - Junzo Shono (in this undated file photo), an eminent author and a member of the Japan Art Academy, died of age on Sept. 21, 2009, at his home in Kawasaki, Kanagawa Prefecture, people close to him said on Sept. 22. He was 88. A native of Osaka, Shono began writing novels after World War II and won the Akutagawa Award in 1955 for his book titled ''Purusaido shokei (Poolside Scene).'' (Kyodo) KYOTO, Japan - This photo shows part of the storyboard of the film ''Seven Samurai'' handwritten by the late director Akira Kurosawa. The storyboard is part of nearly 20,000 materials Ryukoku University released in its online archive May 26. (Kyodo) KYOTO, Japan - This photo shows part of the script of the film ''Rashomon'' and production notes handwritten by the late director Akira Kurosawa. The items are part of nearly 20,000 materials Ryukoku University released in its online archive May 26. (Kyodo) TOKYO, Japan - File photo, taken in October 1994, of film director Kon Ichikawa, who died of pneumonia at a Tokyo hospital on Feb. 13 at age 92, his family said. The photo was taken after Ichikawa received the award for cultural merit from the Japanese government in 1994 (Kyodo) TOKYO, Japan - Well-known Japanese skiing pioneer Keizo Miura (file photo) died of multiple organ failure on Jan. 5 at a Tokyo hospital, his family said. He was 101. Miura skied down the Mont Blanc glacier in France in February 2003 at age 99 together with his eldest son Yuichiro, also known as an adventure skier, and his grandson Yuta. (Kyodo) TOKYO, Japan - Interior of Ghibli Museum, an animation museum based on the ideas of popular animation-film director Hayao Miyazaki. The photo was taken Sept. 17, 2001. (Kyodo) Diary of Japanese woman who chose euthanasia to go on sale

TOKYO, Japan - An undated photo shows Yasuko Nederkoorn (C) flanked by her Dutch husband Rob (L) and son Keisuke (R) at her home in the Netherlands. A diary written by Yasuko who died by euthanasia four years ago at the age of 52 will be available at major bookstores in Japan from July 16, Shodensha Publishing Co. said on July 13. Yasuko kept the diary up until the last moment of her struggle with cancer. TOKYO, Japan - The photo, released by police Jan. 3, shows the back of a bloodstained sweatshirt recovered from a house in the capital's Setagaya Ward where a family of four was found murdered Dec. 31. The Chinese-made pullover has large blood stains on its front and cuffs and was sized for people 175-185 centimeters tall.