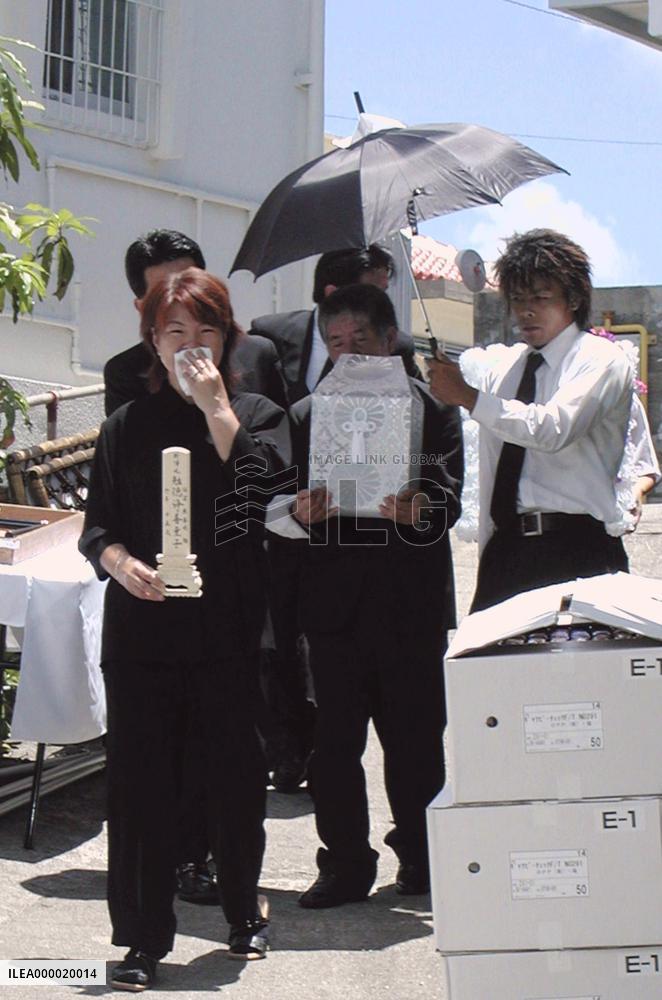 Family of teenager beaten to death returns home with ashes

CHATAN, Japan - The family of 13-year-old Tsutomu Zakimi, who died last month, returns to Chatan, Okinawa Prefecture, on July 7 with his ashes. Police arrested two boys for allegedly killing Zakimi and abandoning his body in a cemetery in the town and a girl on suspicion of helping the two boys. (Kyodo) TOKYO, Japan - Kazuma Yabuno, a 42-year-old computer system engineer, was arrested June 13 on suspicion of creating a replica (shown in photo) of Yahoo Japan Corp.'s website to steal personal information from users of the nation's largest portal site. The Tokyo Metropolitan Police Department said this is the first arrest for phishing in Japan. (Kyodo) TOKYO, Japan - A gray whale presumed the one that appeared in Tokyo Bay last month is brought on land May 11 at a port in the town of Toyama, Chiba Prefecture, after it was found dead outside the bay. Local fishermen found the body tangled in fixed fishing nets set 1.5 kilometers off Toyama. (Kyodo) KYOTO, Japan - A police officer carries to his car a box of evidence from a Christian church in Yawata, Kyoto Prefecture, o April 6 in connection with the arrest of a clergyman of the church on suspicion of sexually molesting a 12-year-old girl who was a member of his congregation. (Kyodo) KYOTO, Japan - Police officers investigate the building of a Christian church in Yawata, Kyoto Prefecture, on April 6 following the arrest of a clergyman on suspicion of sexually molesting a 12-year-old girl who was a member of his congregation. (Kyodo) SAPPORO, Japan - Bereaved family members of Yoshikatsu Okumura, a 58-year-old employee at NTT East Corp. who died after taking part in a two-month training camp, speak at a press conference in Sapporo on March 9 after the Sapporo District Court ordered the company to pay 66 million yen in damages to them. The court recognized the family's claim that Okumura's death was related to the training camp, arranged as part of the company's restructuring program. (Kyodo) OSAKA, Japan - Flowers are laid near the gate to an elementary school in Neyagawa near Osaka on Feb. 15 where a 17-year-old boy stabbed one teacher to death and injured another teacher and a school staffer the previous day. The boy has told police he had a grudge against a teacher, who was not one of the victims, at the school. (Kyodo) ANJO, Japan - Katsunao Ujiie, 34, leaves the Anjo police station in Aichi Prefecture on Feb. 6 as police sent him to prosecutors on suspicion of fatally stabbing an 11-month-old boy and attempting to murder the baby's 3-year-old sister on Feb. 4 at a supermarket in Anjo. (Kyodo) NAGOYA, Japan - Flowers are offered at a site on the second floor of supermarket chain operator Ito-Yokado Co.'s outlet in the city of Anjo, Aichi Prefecture, on Feb. 4 after a man stabbed two children, killing one of them, 11-month-old Shoma Aoyama, and injuring the other, his 3-year-old sister. (Kyodo) FUKUOKA, Japan - Ryoshichi Umezu, the 78-year-old father of a murder victim, Chika Matsumoto, expressed dissatisfaction in Fukuoka Prefecture on Jan. 24 after a Chinese court earlier in the day sentenced a Chinese man to death but spared the life of another after finding them guilty of the 2003 murders of a family of four in the Japanese prefecture. The two Chinese, formerly students in Japan, were sentenced for killing Chika, her husband and clothing dealer Shinjiro, their son Kai and daughter Hina. The second man was given a life term. (Kyodo) YOKOHAMA, Japan - Smoke billows from Yokohama Christ Church in Yokohama's Naka Ward Jan. 4. The church, across the street from the Foreign Cemetery, was burnt to the ground. Police arrested a 23-year-old U.S. citizen who grew up in Japan on suspicion of setting the fire. (Kyodo)